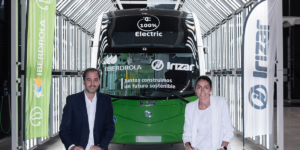 The Spanish companies Irizar and Iberdrola want to work together on the electrification of urban bus fleets, the necessary charging infrastructure and the recycling and reuse of electric bus batteries. To this end, both sides have now signed a cooperation agreement.

While energy supplier Iberdrola has so far been active in electromobility primarily as a charging infrastructure specialist and supplier of renewable energies, Irizar has been making efforts to electrify its bus product portfolio for several years. Commercial vehicles and charging systems are also part of the manufacturer’s range. The initial two-year framework agreement between the two groups now includes the exploration of R&D programmes, demonstration projects and specific bilateral projects to develop new eMobility technologies, in addition to the areas mentioned above.

Iberdrola has already been contracted by Irizar to convert its plants to renewable energy supply. In addition, the energy supplier is to support the bus manufacturer in achieving further sustainability goals. The partners do not mention any other concrete planned projects in their statement.

Irizar last launched a new generation of its ie bus electric bus at the end of 2019, which has since been offered in length variants of ten, twelve, 15 and 18 metres. In order to meet the increasing demand, the commercial vehicle specialist opened an eMobility plant in the northern Spanish city of Aduna in 2018. Already at the inauguration, Irizar expressed its intention to produce not only e-buses but also other electric utility vehicles there. Against this background, the manufacturer presented an electric truck called Irizar ie truck and recently also announced the first order. With Irizar e-mobility, the manufacturer has its own division for “turnkey e-mobility solutions”. The division is likely to play a key role in the cooperation with Iberdrola.

Energy provider Iberdrola, for its part, has ambitious charging infrastructure plans. In spring 2020, the group announced its intention to invest 150 million euros in the installation of 150,000 charging points in households, businesses, cities and on motorways and interurban roads over the next five years. The roadmap also foresees the installation of charging stations in Portugal, Italy and the UK. However, the bulk of the e-car chargers are to be built in Spain.

The group says it has now signed more than 50 agreements on infrastructure development with administrations, institutions, companies, petrol stations, dealers and manufacturers of electric vehicles. These include cooperations with Porsche, Volkswagen and Mercedes-Benz. The company is also involved in plans for a battery cell factory in Spain.

Meanwhile, Iberdrola has also become the first Spanish company to join the Climate Group’s EV100 initiative and has committed to electrifying its entire vehicle fleet. In addition, employees at sites in Spain and the UK will be able to charge their cars at work.