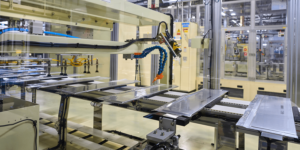 Ultium Cells LLC, the battery joint venture by GM and LG, has kicked-off production in Ohio, USA. The new battery plant is the first of potentially four to come online within the next few years and is currently making battery cells for GMC’s Hummer EV.

GM and LG launched the JV in May 2019 before breaking ground in Warren, Ohio, in July 2020. The company was named Ultium Cells once GM launched the new EV platform of the same name in March 2020.

The new Ohio plant employs about 800 people and is adjacent to GM’s former Lordstown Assembly plant, which GM sold to Lordstown Motors in 2019. Once at total capacity, GM and LG expect to have 1,300 staff. Capacity is given at 40 GWh with options to expand.

However, the new battery cells based on GM’s Ultium platform will exclusively power the GMC Hummer pick-up truck and its SUV version for now.

A spokesperson at the plant would not disclose whether they’d also deliver for other GM EVs. “Ultium Cells is a supplier to GM and will not speculate nor comment on a GM product.”

However, it is Ultium’s declared mission “to support North American electric vehicle assembly capacity of more than 1 million units by mid-decade, while supporting GM plans to supply other automotive companies and other industries including rail, aerospace, heavy trucking and marine customers.” The company had also confirmed earlier that the Cruise Origin and Cadillac Lyriq would receive Ultium cells.

Ultium marks GM’s move away from NMC (nickel-manganese-cobalt) chemistry, as used in the Chevy Bolt, to NMCA chemistry, adding aluminium. This also reduced the cobalt content by about 70 per cent. The new chemistry was developed with LG Chem.

Ultium Cells is constructing other battery factories in Spring Hill for 23 billion dollars and in Tennessee and Lansing, Michigan, for $6.6 bn.

A fourth Ultium Cells factory could reportedly come up in Carlisle, Indiana but remains unconfirmed.

All locations are in proximity to GM vehicle plants.

The Ohio facility spans 2.8 million square feet, equivalent to the size of 30 football fields, and has cost GM and LG 2.3 billion dollars.

At the end of July, the US Department of Energy announced it could grant the battery joint venture a loan of 2.5 billion dollars. Interesting detail: the money comes from the Advanced Technology Vehicles Manufacturing (ATVM) loan programme, which has not funded a new programme since 2010. The last AVTM borrower was Tesla, but the – then – tiny start-up had repaid the loan early in 2013. Ford and Nissan had also previously benefited from the favourable loan conditions from the programme.

Redwood Materials closes in on search for sites in Europe

ProLogium considers building battery plant in Europe or the USA