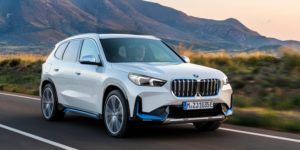 BMW has announced a series of market launches with electric and plug-in hybrid drives. The main focus is on the completely new X1 series, which for the first time is also available in a purely battery-electric version. The i4 will be followed by a new base model and two plug-in hybrids in the 7 Series.

November 2022 will see the launch of the BMW iX1 xDrive30, the all-electric model variant of the new BMW X1 unveiled in early June. This will be joined by two plug-in hybrid versions of the model, the X1 xDrive25e and X1 xDrive30e. The BEV variant is only available with two electric motors and an all-wheel drive system, the system output is 200 kW (230 kW in boost). The range with the 64.7 kWh battery is between 413 and 438 kilometres, depending on the equipment. Prices start at 55,000 euros.

Also in November 2022, the BMW i4 model family will get another member: the BMW i4 eDrive35 will be the new entry-level version of the electric model. It is already available in the USA. This is not only a weaker version of the electric motor installed in the rear (210 kW instead of 250 kW in the i4 eDrive40), but above all a smaller battery. BMW does not explicitly state this in the German announcement for the market launch of the 35 Series, but at the premiere of the US model in August it said that a 66 kWh (net, 70.2 kWh gross) power storage unit is installed there. The WLTP range is up to 483 kilometres. BMW does not say whether the 35 will also have up to 200 kW charging power from the large battery. There is also no statement on the price of the vehicle in the press release. In the BMW configurator, the i4 eDrive35 is listed from 56,500 euros and thus only 2,700 euros cheaper than the previous base model with a larger battery.

The 7 Series will also be expanded in November with additional engine options: The all-electric i7 will be followed by two plug-in hybrid versions, the 750e xDrive and M760e xDrive. Both can be ordered from 12 October and will be delivered to customers from spring 2023. Prices in Germany start at 123,500 euros for the 750e xDrive and 144,000 euros for the BMW M760e xDrive.

In addition, there is the first original BMW M model since the BMW M1: the BMW XM with a 480 kW plug-in hybrid drive will be produced at the US plant in Spartanburg from December 2022 and will go on sale worldwide in spring 2023. It is the production version of the Concept XM presented in November 2021. Thanks to a high-voltage battery with a usable energy content of 25.7 kWh, the PHEV SUV can drive up to 88 kilometres and up to 140 km/h in pure electric mode, according to BMW.