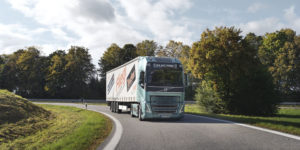 The Volvo Group has announced plans to build a battery module production facility at its truck plant in Ghent, Belgium. This is scheduled to go into operation in 2025 and will cost around 75 million euros in the first stage.

The Volvo Group already has a battery assembly plant in Ghent: as reported, cells and modules supplied by Samsung SDI have been assembled there into battery packs for the FH, FM and FMX heavy-duty electric truck series since May. The ready-to-install battery packs are currently being transported to the Gothenburg plant, where series production of the three models started in September. From the second half of 2023, the electric versions of the FH, FM and FMX series will also be built in Ghent.

However, the investment decision for the new assembly of battery modules should not only be seen against the backdrop of the ramp-up in electric trucks. The manufacturer is also planning its own battery cell plant in Sweden, where battery cells specifically developed for electric commercial vehicles will be produced. The new module assembly plant in Ghent will therefore be designed to handle battery cells from partners as well as from the company’s own cell factory.

“The building is expected to be 12,000 m2 and be located at the Volvo Group manufacturing site,” says Jens Holtinger, executive vice president, Group Trucks Operations. “The new high-tech module factory will consist of an almost fully automated process with robots. This means that employees with the necessary competences will be recruited, both externally and by building on our internal competences.”