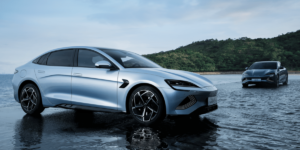 Compared to the 675,000 New Energy Vehicles sold in September, the 676,000 units are again a slight increase. But if you add the 508,000 battery-electric cars and 167,000 plug-in hybrids, the total is only 675,000 units. Since the figures published by the China Passenger Car Association (CPCA) either contain rounding errors or a few fuel cell vehicles, it is not possible to say exactly how large the increase actually is.

What is clear, however, is that NEV sales exceeded 600,000 units for the third month in a row. BEVs only increased by 1,000 (rounded) units to 508,000 sales compared to September, while PHEVs declined by 1,000 units (rounded) to 167,000 sales. Therefore, both types of drive remained almost constant, and so did the breakdown of around 75 per cent BEVs and 25 per cent PHEVs within the New Energy Vehicles.

In the current year, 5.015 million NEV passenger cars were sold in China, an increase of 110 per cent. Across all powertrains, 2.2 million cars were sold in October, up 11 per cent year-to-date, but down nearly five per cent from October. Thus, almost 31 per cent of all new cars in China last month were New Energy Vehicles.

While there is some ambiguity in the overall NEV statistics, a new record is assured for BYD. The manufacturer sold 217,618 New Energy Vehicles – up from 200,973 NEVs in September. Both BEVs (to 103,157 units) and PHEVs (114,361 units) have increased. However, it is not known how many BYD vehicles were exported – the brand is due to launch in Europe in the fourth quarter.

Tesla’s sales declined slightly in October, with the US company selling 71,704 BEVs produced in China. However, as is usual for Tesla in the first month of a quarter, the majority of these were exported. 54,504 vehicles were sold outside China – so only 17,200 Model Y and Model 3 remained in the country. In September, out of over 83,000 Teslas built in China, only a little over 5,000 were exported.

Measured by the number of vehicles that went to Chinese customers, Tesla was even behind two Chinese manufacturers with the 17,200 units. GAC Aion continued its run in October, increasing sales to 30,063 battery electric cars. Neta also narrowly edged out Tesla with 18,016 BEVs. Zeekr’s sales also hit five figures for the first time: Although the Geely brand introduced its second model, the 009, the 10,119 BEVs in October are all still accounted for by the first model, 001, putting Zeekr even just ahead of Nio (10,059 e-cars).

After two months of five-digit sales, Leapmotor only sold 7,026 electric cars in October. Xpeng also has to cope with a conspicuous decline: although monthly sales were already in five figures in some cases and Xpeng had actually established itself before Nio, it continues to go downhill. In October, Xpeng was only able to sell 5,101 BEVs – and thus has to let Zeekr follow Nio in terms of sales. It remains to be seen whether the G9 e-SUV can reverse the trend – or whether Xpeng will soon have to look to Voyah as competition – with 2,553 BEVs in October.