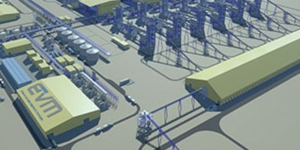 The Australian battery materials company EV Metals Group has secured 127 hectares of land in Saudi Arabia to build a battery chemicals processing complex. Production of lithium hydroxide at the plant located in Yanbu Industrial City is scheduled to start in 2026.

The Australian company’s offshoot EVM Arabia has also already received an environmental permit for the planned complex. Here, raw materials from Western Australia will be processed to produce high-purity chemicals for electric vehicle batteries containing lithium, nickel, cobalt, manganese and other metals for the downstream production of active cathode materials. Construction is scheduled to begin in the third quarter of this year.

The complex will be divided into different plants. The lithium chemicals plant for the production of high-purity lithium hydroxide monohydrate (LHM) is to be built first with two production lines. Four more are to follow by 2030, by which time the nickel refining plant, among others, will also be in operation.

The primary products from EVM are to be exported to Saudi Arabia and processed there. Two electric car plants have already been announced in Saudi Arabia although plans for a corresponding battery production plant have not yet been revealed. Lucid Motors wants to build a plant for up to 150,000 electric cars in Saudi Arabia, while the second plant was announced by Foxconn for Ceer brand electric cars, a joint venture of Foxconn and the Saudi sovereign wealth fund PIF. Both plants are to be built in the King Abdullah Economic City (KAEC). The EV Metals complex in Yanbu is just over 200 kilometres north, but also on the Red Sea coast.

The Australian company says that the production of lithium hydroxide is scheduled to begin in 2026. The initial plan is to produce 50,000 tonnes and later 150,000 tonnes per year. In addition to the environmental permit, EVM Arabia has already received a gas and electricity allocation from Saudi Arabia’s Ministry of Energy, which will cover the energy needs of lithium hydroxide production.

“Our Battery Chemicals Complex is strategically located to serve demand for high purity chemicals from electric vehicle and battery cell manufacturers both locally and from target markets in Europe and North America looking for stable and transparent supply chains,” says Michael Naylor, Chairman of EVM Arabia and Managing Director and CEO of EVM Group.

While Saudi Arabia is a long way from Australia, the Australian company has existing interests relatively close by in the UK. In May last year, after the British chemical company Johnson Matthey surprisingly announced its withdrawal from the business with battery materials for the automotive industry in November 2021, the Australian EV Metals Group acquired Johnson Matthey’s assets at the Battery Technology Centre in Oxford and the Battery Technology Centre and Pilot Plant in Billingham, a research centre in Moosburg, Germany, and a partially constructed site in Konin, Poland, for £50 million (59 million euros). The sale also included Johnson Matthey’s eLNO technology based on the GEMX and CAM-7 cathode platforms.