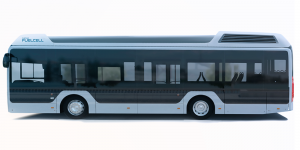 The Portuguese bus manufacturer CaetanoBus will receive fuel cell systems from Toyota. The first demonstration buses by CaetanoBus with Toyota’s FC technology are scheduled to roll off the assembly line within slightly more than a year.

The Japanese company will deliver fuel cell stacks to Caetanobus as well as hydrogen tanks and further components. The Portuguese bus manufacturer will then begin manufacturing hydrogen buses for public transit. According to president José Ramos, CaetanoBus aims to be the first company in Europe to implement the Toyota technology. He added that his company is convinced that FCEVs are a good solution for emissions-free buses.

Toyota themselves presented a fuel cell bus named Sora last year. The new development is based on the fuel cell technology from Toyota’s H2 personal vehicle Mirai, and will find it’s first major use during the 2020 Olympic Games in Tokyo. As of 2025, Toyota then plans to implement their fuel cell technology in a range of SUVs, Pickups and utility vehicles. In order to help bridge the gap to serial mass production, the manufacturer aims to reduce the proportions of costly materials, such as platinum.

Many experts believe that fuel cell technology will have difficulty establishing itself in the mass market. Regardless, Toyota went ahead and released the Mirai in 2014 as the first serial fuel cell vehicle on the market. The purchase price of about 60,000 dollars (before subsidies) and the lacking hydrogen infrastructure resulted in rather slow sales, however. Even today, less than 6,000 Mirai have been sold worldwide.