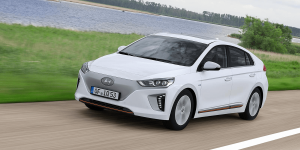 As far as mobility services are concerned, Hyundai has so far only made vehicles available to ride-hailing providers such as Uber. With its own rental system, on the other hand, Hyundai says it could develop into an integrated mobility service provider and “push” its electric vehicles. At the end of 2017, Hyundai had already started a test car sharing system with 100 fully electric Ioniqs in Amsterdam, but ended it again at the end of 2018, after more than 100,000 rental transactions.

But this does not mean that the idea is off the table: “We are thinking about a possible subscription model for EVs,” Hyundai Marketing Director Wonhong Cho told Europe Autonews. But it is still too early to say where and when such a permanent subscription model could be introduced for Hyundai’s electric cars. The manufacturer must first resolve the current battery bottlenecks, which have so far only allowed limited supplies of Hyundai vehicles.

Cho promised that Hyundai would supply more Kona electric units to Europe in 2019, but without becoming more concrete. According to Thomas Schmid, COO of Hyundai Europe, three times as many electric Kona would have to be imported from South Korea as before to reduce the waiting time for customers in Europe from one year to three to four months.

According to new information, Hyundai plans to continue the development of a series of powertrains for hybrid, all-electric and fuel cell vehicles, to have a total of 44 electrified models in its range by 2025 and to achieve annual sales of around 1.67 million units with these.

Meanwhile, South Korean carmaker Kia has announced that within a few weeks it has sold all 900 electric Niro models scheduled for the UK market in 2019. Supplies are not expected until 2020.