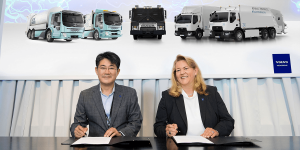 The Volvo Group and Samsung SDI have formed a strategic alliance to develop battery packs specifically for Volvo electric trucks. Samsung SDI will supply the battery cells and modules to the Volvo Group that will assemble these in its facilities.

Since Volvo and Samsung SDI have not disclosed any more details about the scope of the cooperation, the exact order volume and the battery capacity to be supplied remains unclear.

Volvo started delivering its first electric trucks to selected customers in February this year. Series production of the two models Volvo FL Electric and Volvo FE Electric will start in the second half of 2019 with a limited number of vehicles for the European markets.

In April last year Volvo Trucks said it would market the battery technology across brands to reduce cost. They would not only share their tech with electric trucks though but also with buses and heavy industries.

Samsung brings its battery expertise to the partnership, while Volvo gives the battery manufacturer insight into the specific requirements of the commercial vehicle business. “As we stand at the crosscurrents of the mobility and transportation industry, we are convinced that this alliance will provide superior offerings pertaining to energy, safety and sustainability,” said Young-Hyun Jun, CEO of Samsung SDI. They are confident that the alliance will secure the market leadership of both companies in the long term.

Volvo’s construction machinery subsidiary Volvo Construction Equipment recently announced that it would launch a series of compact electric wheel loaders and excavators in mid-2020 and stop developing new diesel engines for these vehicles. The subsidiary is now investing 16 million Swedish crowns (around 1.5 million euros) in its Eskilstuna site. Among other things, the money will flow into an arena for customer demonstrations of electric and autonomous machines. In March, Ericsson installed Sweden’s first 5G mast for industrial applications so that Volvo CE could test its remote-controlled machines with short response times.