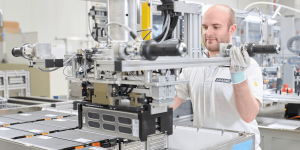 At Busworld in Brussels, Akasol will be presenting three new lithium-ion battery systems for all-electric and hybrid city buses, intercity buses and coaches. A new battery system for fuel cell vehicles will also be on show.

Akasol’s upcoming flagship – battery system AKASystem AKM CYC – will be produced in Darmstadt from 2021 and in Detroit from 2022 as part of a recently awarded series order for the “world’s leading commercial vehicle manufacturer”.

Now in its third generation, the AKAModule CYC lithium-ion battery module achieves an energy density of approx. 221 Wh/kg with the aid of liquid-cooled, scalable battery modules at the system level. For example, fully electric city buses could be equipped with battery capacities of between 600 and 1,000 kWh, depending on the vehicle’s size. Also, charging could take place at a rate of 1C. Akasol says the charging capacity will be up to 500 kW. Manufacturers should, therefore, be able to charge their vehicles up to 80 per cent in just 45 minutes to fully charge in around 1.5 hours. Akasol achieves this high energy density and the required charging and discharging capacity with the use of 21700 round cells.

The AKAModule CYC battery module will be available in two standard versions. The small version (AKAModule 64 CYC) is of the same size as the battery module standard PHEV VDA and is heat regulated through in-system cold plates. The large version (AKAModule 150 CYC) has a liquid cooling structure integrated into the module to enable highly efficient heat management of each battery cell, even in larger module designs.

The German battery system manufacturer will also present the second generation of the AKA system OEM PRC at Busworld, which is applicable for both battery-electric and fuel cell power trains. This system will provide 33 per cent more energy than the first generation and store around 400 kWh of energy in the same installation space. With a charging rate of up to 2C, the system can be charged with over 500 kW (even with smaller battery system sizes). The second-generation AKA OEM PRC system will go into series production for two large bus manufacturers from mid-2020.

The use of the AKASystem OEM PRC for fuel cell powertrains will be tested in 50 vehicles as early as 2020. As a result, there are plans to expand cooperation with an as-yet-unnamed Asian commercial vehicle manufacturer. Production is planned for the company’s plant in Langen, Germany. This plant will be extended to a total capacity of 800 MWh from the beginning of next year in conjunction with the second production line.

A further highlight at Busworld from Akasol will be their 48 V AKARack solution: the 19-inch battery system encompasses thermal management and can be used for various applications with a storage capacity of 6.5 kWh per rack. The solution can achieve a charging rate of up to 2C. The AKARack will, therefore, be suitable for mild hybrid applications on a 48 V basis and on-board power supply in commercial vehicles of all kinds. From mid-2020, it will be used as a series product for construction machinery and marine applications. Besides, Akasol plans to offer the AKARack as a high-voltage solution after the introduction of the 48 V version at the end of 2020.