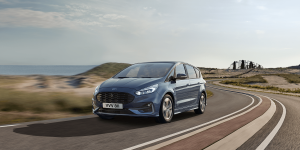 Ford will produce these electrified models in Valencia together with models with conventional drive systems. The two new battery assembly lines worth 25 million euros are scheduled to go into operation in September 2020.

Ford has invested €3 billion in its Valencia facility since 2011, including €750 million to support the production of Kuga, which Ford calls its “most electrified vehicle ever”. For Ford, however, this means a mostly hybrid line-up including the Kuga Plug-In Hybrid, Kuga EcoBlue Hybrid (48-volt mild-hybrid) and Kuga Hybrid (full-hybrid) variants. Ford also produces the Mondeo Hybrid and Mondeo Hybrid wagon models at its Valencia manufacturing facility.


Only in the US, the manufacturer is gearing up to produce a fully electric vehicle. Ford has announced investments of around 700 million US dollars in their Dearborn plant. The factory in the state of Michigan is to produce the electrified variants of the F-150 pickup. The next-gen F-150 is to be presented together with the hybrid version 2020; the purely electric version will follow “shortly afterwards,” according to Ford. The battery packs for both electrified versions of the F-150 will also be assembled in Dearborn.

Back to Europe, where Ford will soon offer all-electric vehicles too. The carmaker has to due to the EU’s more strict environmental regulations that are pushing Ford to prioritise the European market. And yet Ford so far has only one electric car and one commercial electric vehicle lined up. According to insider information, Ford wants to allocate 60 per cent of the American-made Mustang Mach-E to the EU in the first year of production as reported.

With the US carmaker planning to make no more than 50,000 units of the electric SUV, around 30,000 vehicles would get to the EU and about 20,000 cars would remain in the USA with the 60 per cent share mentioned above. However, there is no confirmation from the manufacturer for these figures or market allocation.

Ford had announced its electrification strategy for Europe in April, but almost only listed hybrid vehicles. Also at the IAA in September, Ford primarily showed hybrid models, apart from the Mustang E and even the all-electric version of the Transit set for launch in 2021.

Moreover, the US carmaker finalised a deal with VW in July last year. The original agreement provided for Ford to purchase 600,000 MEB kits from Volkswagen for its first all-electric model for Europe. In September 2019 however, there was talk of building a second MEB-based electric car for the European market. “Yes, we are in talks about this,” Ford Europe boss Stuart Rowley confirmed at the time.