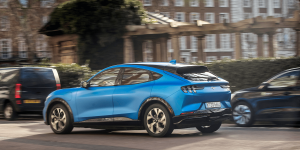 Ford has now presented the Mustang Mach-E for the European public for the first time at an event. At their Europe Roadshow Ford is taking the opportunity to inform consumers about the US-American company’s path to an electrified future. Part of this plan includes installing 1,000 charging stations at European company locations over the next three years.

As has long since been announced, the Mustang Mach-E is coming onto the European market with two battery options, with rear-wheel or four-wheel drive, as well as in various power stages. In Germany, the Mustang Mach-E starts at a price of 46,900 euros.

Ford initially presented the 4.71-metre-long, 1.88-metre-wide and 1.60-metre-high battery-electric vehicle with a crossover design in November last year. The prices and technical data were also announced at the time. At the market launch, a special ‘First Edition’ was revealed. With last year’s presentation, the vehicle could already be configured and reserved against a deposit of 1,000 euros. The reservation contingent for the ‘First Edition’ is now exhausted.

Now Ford is offering those who want to make a Mustang Mach-E reservation this year a free one-year subscription to the FordPass app services. Customers can use NewMotion’s public charging network in Europe with 125,000 locations with the system called Ford Charging Solutions, into which the FordPass app is integrated. And, of course, Ford customers will also have access to the high-power chargers of the Ionity joint venture co-founded by Ford. ‘The charging service is not only available to buyers of a Mach-E, but can also be used by all owners of a purely electric vehicle or a plug-in hybrid from Ford. Prices have not yet been mentioned.

In addition, Ford will set up 1,000 charging stations for employees at European company locations over the next three years. The carmaker is thus following other manufacturers such as Audi, BMW, Volkswagen and Jaguar Land Rover.


Ford is investing over eleven billion dollars worldwide in the electrification of its own model series. However, only a minority of these will be BEVs: The US-American company is rather developing a portfolio of mild, full and plug-in hybrid vehicles. By the end of 2021, Ford wants to offer a total of 18 electrified models in Europe. When the European electrification strategy was announced almost a year ago, 16 models were still under discussion. The current strategy includes the 48-volt hybrids Ford Fiesta, Puma, Focus, Kuga, Transit, Transit Custom and the Tourneo Custom. As full hybrids Ford wants to offer the Mondeo, Kuga, S-Max and Galaxy. The Explorer, Kuga, Transit Custom and Tourneo Custom complete the portfolio as plug-in hybrids. Only the Mustang Mach-E, the Transit and a previously unknown light commercial vehicle will be purely electric.

Only in January, Ford announced an investment of 42 million euros in its production plant in Valencia, Spain. The lion’s share of this sum – 24 million euros – will be used to set up two new production lines for the assembly of lithium-ion batteries, which will in future be installed in Ford models Kuga Plug-In Hybrid, Kuga Hybrid, S-Max Hybrid and Galaxy Hybrid. These electrified models will be produced in Valencia along with the models with conventional drive systems. The new battery assembly lines are scheduled to go into operation in September 2020.

“Ford has always been committed to the democratization of vehicles and technology, and now we want to do the same for electrification. With 18 new electrified vehicles coming to Europe by the end of 2021, we will have an electrified option for every customer that fits their budget and individual needs,” said Stuart Rowley, President of Ford of Europe. “Our Europe-wide roadshow will help answer our customers’ pressing questions about electric vehicles and give them everything they need to make the right choice of vehicle to suit their individual needs.”

With reporting by Daniel Bönnighausen, Germany