The figures are taken from a recent survey by the Centre for Solar Energy and Hydrogen Research Baden-Württemberg (ZSW). In the evaluation for 2018, there were still 5.6 million vehicles worldwide. In 2019, China alone will have 3.8 million vehicles, followed at some distance by the USA with almost 1.5 million vehicles. Full hybrids and fuel cell vehicles were not included – only cars that are charged by cable were included.

As already reported in other evaluations – such as the CAM’s eMobility Report – growth rates have stagnated or even declined in these two important markets. In China 1,204,000 new registrations were registered (minus 52,000), in the USA 329,500 (minus 31,800). As a result, the number of new registrations reached a peak in 2019, but compared to 2018 the increase was only slight – growth shrank from 74 to 4 per cent.

In contrast, the German market has developed positively, albeit at a low level, as the ZSW notes. The stock of electric vehicles in Germany now stands at just under 231,000 vehicles. Partly due to PHEV subsidies, the growth in new registrations has risen from 24 to 61 per cent, with a total of 108,600 new electric vehicles registered in 2019. This puts Germany in 3rd place in the ZSW ranking (2018: 4th place). 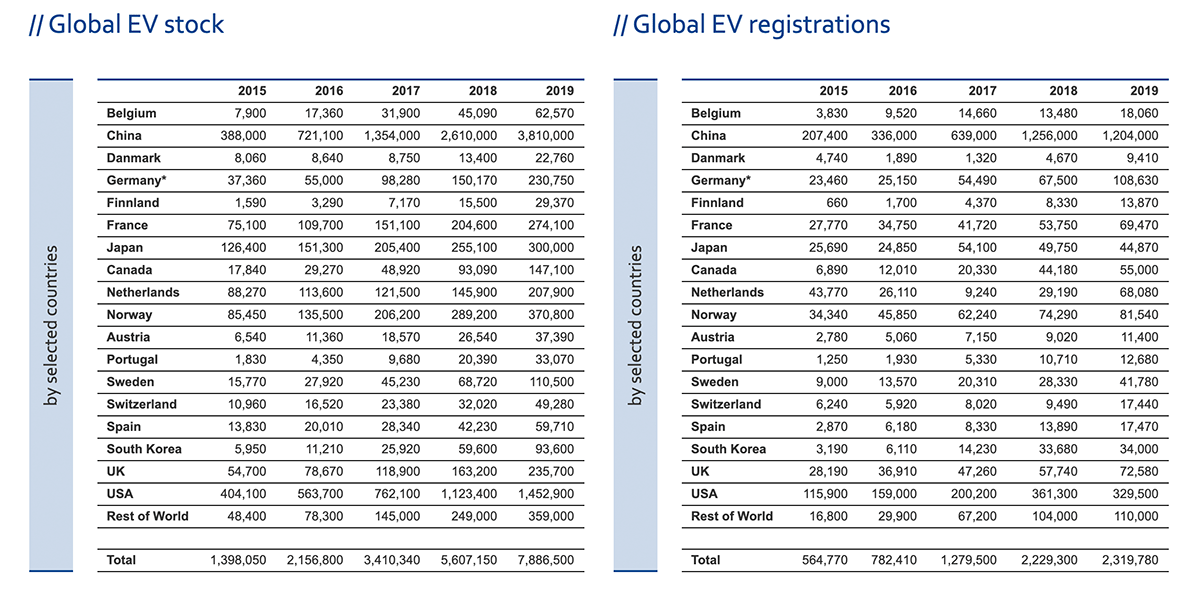 Germany has thus overtaken Norway, which has 81,540 new registrations. However, in terms of market size, Norway has an EV share of 57 per cent of new registrations and Germany three per cent. In China, the figure is five per cent, in the USA two per cent. And also in terms of the number of vehicles on the road, Norway is well ahead of Germany due to the extremely strong previous years – there are 370,800 electric vehicles, which means third place globally after China and the USA.

In fourth place is Japan with around 300,000, followed by France with 274,100 and the United Kingdom with 235,700. Germany is in seventh place with 230,700 electric vehicles – also an improvement of one place compared with the previous year. 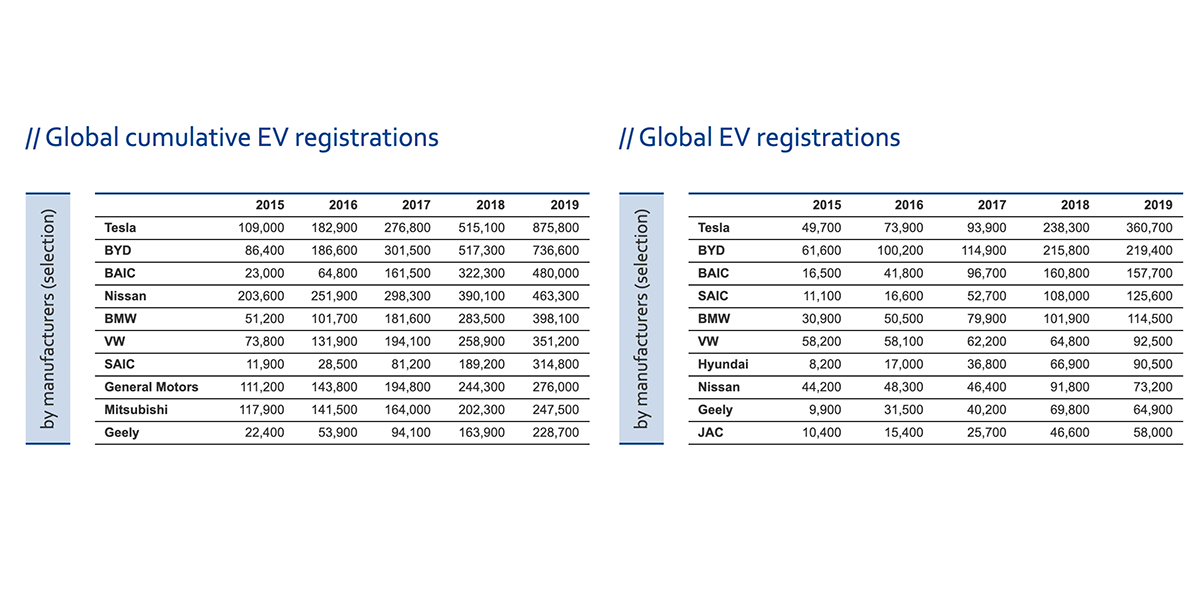 There is a change of place at the top in the electric car fleet when it is filtered by make. In 2018, BYD and Tesla overtook the previous top dog Nissan. Due to the stagnating market in China, the situation changed in 2019: While BYD was only able to increase new registrations minimally (from 215,800 to 219,000 vehicles), Tesla is known to have made strong gains and with 361,000 new registrations is unchallenged at the top of the ZSW ranking (2018: 233,000 vehicles). 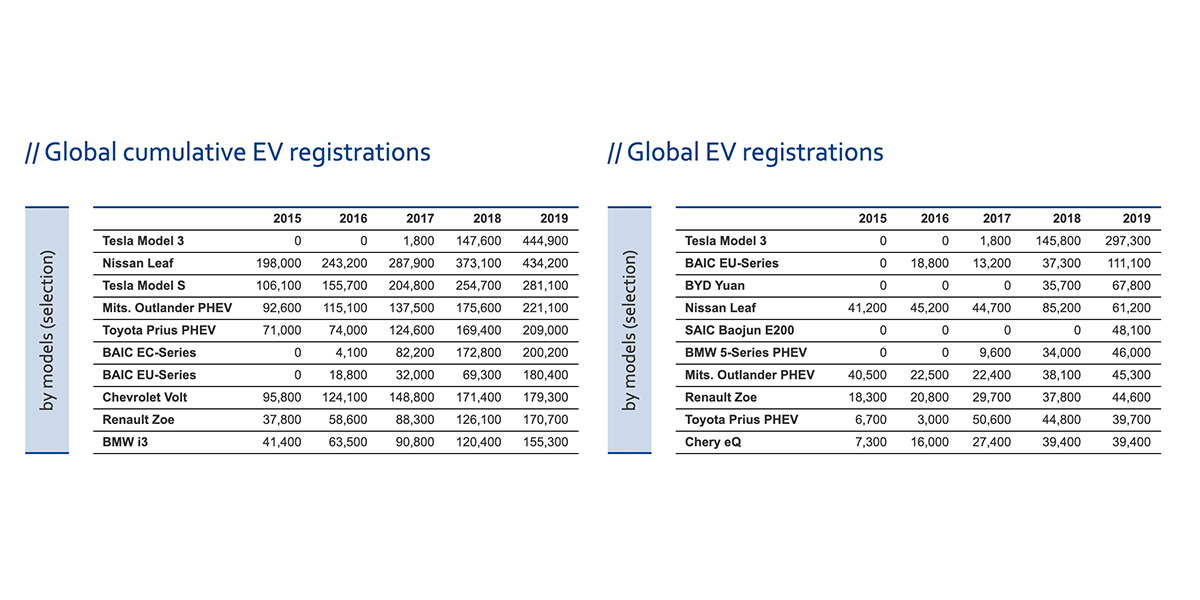 In terms of cumulative new registrations, Model 3 lead is significantly greater than in the stock figures. Only the EU series of BYD is still in the six-digit range (111,000), while the third-placed BYD Yuan is already falling behind with 68,000 new registrations. The best German model is the BMW 5 Series PHEV in sixth place with 46,000 units sold. 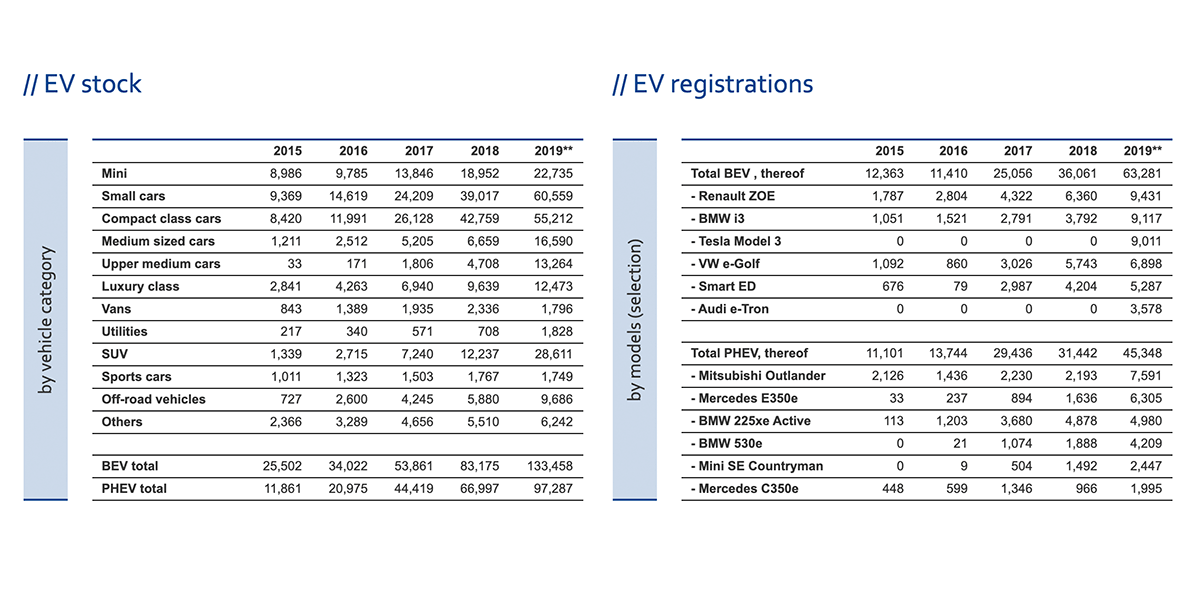 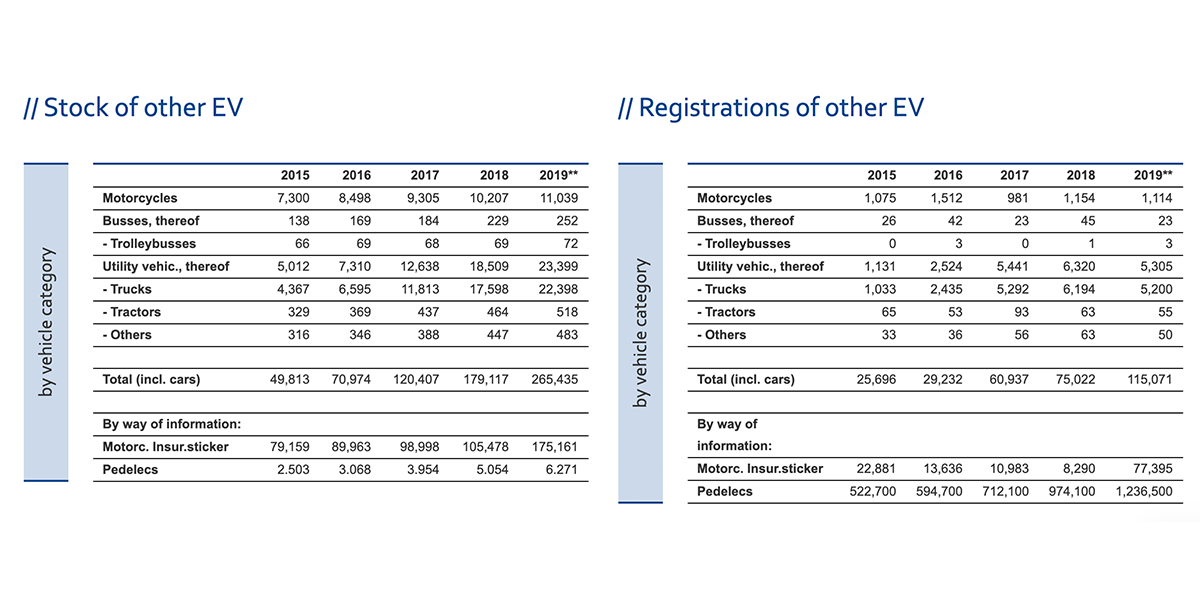 In terms of vehicle classes, it is striking that, according to the ZSW 2019, the number of electric-buses in Germany has only increased by just 23 units – in 2018 there were still 45 new registrations. The stock has just increased to 252 electric buses. In the case of truck tractors, only 55 vehicles have been added, presumably mostly test vehicles of the industry. More pleasing is the situation with the electric trucks in general; according to the ZSW, 22,398 of these are already on German roads, an addition of 5,200 vehicles.

In its evaluation, the ZSW has tried to achieve the best possible comparability of the figures, but this is difficult because of the very different international data situation. An example: While the number of electric vehicles worldwide could be recorded country-specifically for existing and new registrations, corresponding data differentiated by manufacturer and model is not available globally. “For this reason, the analysis by manufacturer and model is based on new registration data from the 18 largest electric mobility markets. The ZSW data thus represent a conservative calculation of the actual development. Since there is also no globally available data on registered electric cars by manufacturer and model, the formulation ‘cumulative new registrations’ is used,” says ZSW, describing the problem.

Kia prioritises Europe over US in face of battery trouble