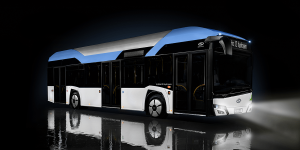 Transports Metropolitans de Barcelona (TMB) is also relying on hydrogen as part of the conversion of its bus fleet. After TMB ordered a total of 23 articulated battery-electric buses from Solaris and Irizar in February, a tender for the purchase of the first fuel cell buses has now been launched.

Eight 12-meter fuel cell buses are scheduled to be delivered to Barcelona in November 2021 and are expected to enter service in early 2022. The volume of the tender is 6.5 million euros. The EU’s JIVE 2 programme funds part of this amount. The Autoritat del Transport Metropolità de Barcelona (ATM) is also involved in the hydrogen project. As mentioned, TMB recently ordered from Solaris and Irizar, but the Spanish company does not currently have a fuel cell bus on offer.

As part of the planned procurement of the buses, TMB is cooperating with the Zona Franca Consortium (CZFB) to build a facility for the production, storage and refuelling of hydrogen. The 5,000 square metre site has already been found, and the expected consumption was set at 160 kilograms of hydrogen per day (i.e. 20 kilograms per bus). In addition to the fuel cell buses of TMB, the plant is “potentially” to be opened to other fleets and also private FCEVs. Currently, no hydrogen filling station in Barcelona is also designed for commercial vehicles.

The goal of TMB is that by 2030 the active fleet will consist only of natural gas, hybrid and electric buses. Pure diesel buses are to be sorted out by then.