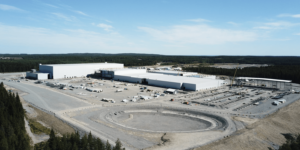 Northvolt says that Baillie Gifford, as well as existing investors Goldman Sachs Merchant Banking Division and VW, have led the $600 million (currently 513 million euros) private placement but have not disclosed the exact distribution. It is therefore not clear what shares Volkswagen will hold in Northvolt in the future. The German carmaking giant initially acquired 20 per cent of the Swedish battery cell manufacturer in the summer of 2019.

“We are in the middle of a race to establish manufacturing capacity in Europe, and I believe the companies that are best at attracting talent and capital, while scaling their blueprints the fastest, will be the most successful,” says Northvolt co-founder and CEO Peter Carlsson. “With these world-class partners behind us, we have created a solid foundation to go on and execute our plans to enable large-scale manufacturing of green batteries in Europe.”

The capital increase will enable investments in what Northvolt considers three key areas: the expansion of production capacity to 150 GWh by 2030, the expansion of the Northvolt Labs research centre, and the construction of a gigabit lithium-ion battery recycling plant. Northvolt announced the Revolt recycling program in December 2019. The recycling plant is to be built right next to the actual battery cell factory Northvolt Ett in Skellefteå, Sweden. Northvolt claims that, with an initial capacity of 4 GWh, the plant will be the largest in the world and the only large-scale plant in Europe that can recycle lithium in addition to cobalt, nickel, manganese and other metals.

The company’s capital requirements are high in the current planning and construction phase. In July just passed, Northvolt secured further loans of $1.6 billion from a number of banks. At that time they said that they would primarily use these funds to finance the construction of the cell factory Northvolt Ett and the German cell factory in Salzgitter that is joint work with VW.

Besides Volkswagen, BMW is also one of Northvolt’s customers. The Munich-based company has been working with Northvolt since 2018 but did not conclude a longer-term supply contract with the Swedish company until July 2020. Starting in 2024, Northvolt will supply the carmaker with cells manufactured in Skellefteå worth two billion euros.