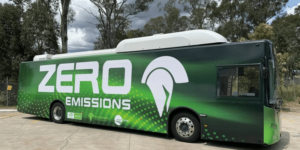 The electric bus manufacturer Nexport has announced plans for the production of electric vehicles in a new plant in the Australian state of New South Wales. It will initially produce buses, but later also other types of vehicles such as cars, trucks and vans.

The planned production facility of Nexport, a subsidiary of the clean-tech investment group TrueGreen, is intended to revitalise nothing less than the Australian automotive industry.

The location between Sydney and Canberra was strategically chosen because the company expects the greatest demand in these cities, according to several media reports. Nexport is also involved in the procurement of 8,000 electric buses for the state’s public bus network via the government of New South Wales. The investment in the plant is expected to amount to 700 million Australian dollars and create around 2,000 new jobs within five years. There are contradictory statements about the planned production of the plant. While the portal Car Advice speaks of the end of 2021, The Driven states that full operational strength is to be achieved in five years.

One way or another, Nexport wants to combine local production with the “sensible import” of key components from abroad in the future. A partnership already exists with the Chinese electric vehicle manufacturer BYD, which will supply its drives and initially also the chassis for the electric buses. Nexport is currently assembling its buses in assembly plants in China and Malaysia, with the company sourcing some parts from Switzerland. The manufacturer intends to close the assembly plant in Malaysia in favour of Down Under. Until the plant in New South Wales is ready, according to media reports, production will already be in an “interim plant”. The order backlog currently amounts to 115 buses.

Nexport also wants to make a name for itself as an importer of electric vehicles by the time its plant is completed. To this end, the manufacturer is currently creating an import platform called EV Direct. Plans include importing the BYD Tang SUV, the BYD Song PHEV crossover and the BYD Qin compact sedan, with Nexport carrying out all the necessary technical upgrades on-site. Further car brands are to follow.

MAN to focus on H2 trucks