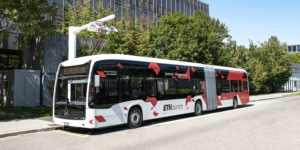 Mercedes-Benz is supplying three units of the new all-electric eCitaro G articulated bus to Switzerland. They will be used by the Eurobus transport company to provide a fast connection between two university locations of the ETH in Zurich.

The Daimler subsidiary EvoBus only presented the articulated bus ‘eCitaro G’ at the end of September 2020. Now, the buses in Zürich are painted in the colors of the Swiss Federal Institute of Technology there and connect the ETH Zentrum and ETH Hönggerberg locations. The 18.13-meter-long vehicles will be used by the transport company Eurobus welti-furrer AG, which according to Daimler is the first transport company to operate the articulated bus model on a regular service basis.

Up to now, the connection called ‘ETH Link’ has been operated with diesel buses. Now the three eCitaro Gs are taking over the route, which has been equipped with a pantograph for intermediate loads for this purpose. The system follows the panto-up concept, i.e. the charging arm lifts off the vehicle roof and docks onto the infrastructure’s power supply. The charging power there is 300 kW, the eCitaro G batteries hold 243 kWh. At the station, the buses will be charged exclusively with Swiss hydro-electric power.

The articulated buses offer 38 seats, two wheelchair spaces and 93 standing room, which results in a passenger capacity of 131 seats. One of the four doors is equipped with a wheelchair ramp and allows persons with reduced mobility to board the bus without any obstacles. The buses for the university shuttle are also equipped with WLAN and USB charging sockets.

“In addition to being environmentally friendly, the new electric buses are characterised in particular by smooth running, comfortable low-floor entry and an attractive interior and exterior design,” says Patrick Nussbaumer, Managing Director of EUROBUS welti-furrer AG. “The ETH is thus setting an example and strengthening its position as a future-oriented educational institution.”

Chocolate manufacturer Ritter Sport has also been using the eActros electric truck from Mercedes-Benz for a few days now as part of a practical test for production supply on the route between the Dettenhausen warehouse and the production site in Waldenbuch.

The electric 18-tonne truck is equipped with a Schmitz Cargobull refrigerated swap body which is also electrically operated and therefore emission-free. The batteries of the electric truck are charged overnight on the Ritter Sport factory premises after the day’s tours. Since August 2020, the eActros has been in the second phase of its practical testing and will gradually be handed over to other customers as part of the so-called “innovation fleet”.