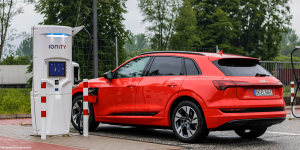 Because the expansion of the Ionity fast-charging network is progressing too slowly, the owners are discussing attracting private equity capital for Ionity. According to a media report, financial circles are talking about at least 500 million euros in fresh money.

As Manager Magazin writes, “even the very big investors” have been showing interest but the article does not mention names of possible investors. According to the magazine, the coming weeks will be decisive: In this period, not only the current valuation of the fast-charging joint venture will be discussed, but the interested parties will get an insight into the books as part of a due diligence review.

Ionity has not yet responded to a request for comment from electrive.

The Ionity owners – Mercedes-Benz, BMW, Ford, the VW Group through its subsidiaries Audi and Porsche, and more recently Hyundai-Kia – have each invested 200 million euros to own their 20 per cent. Manager Magazin writes that “at least 500 million euros” would help to accelerate the expansion of the charging network. Apparently, there is hope that external financial investors will dispel the concerns of some car managers: “The higher the outside share, the lower the influence of the brakemen,” writes the magazine.

The expansion of the Ionity network is indeed lagging behind. Instead of the 400 locations in Europe targeted by the end of 2020, around 330 are in operation. So the mark of 430 sites planned for the end of 2021 is not just 30 charging parks short, but 100. For comparison, Tesla already operates 590 Supercharger sites in Europe, and often with more charging points.

When comparing these numbers, however, a difference in planning must be taken into account: While Ionity often builds its Superchargers at highway rest stops – and thus requires one location with four to six charging points in each direction of travel – Tesla prefers car yards or locations that can be reached via a minimal detour from either direction of travel. For example, in Germany, while Ionity operates four charging points each at the Ohligser Heide Ost and West service areas on the A3 between Düsseldorf and Cologne, Tesla has installed 20 Superchargers a few kilometres away at the Seed&Greet fast-charging park, which can be reached not only via the highway but also more easily by residents from the surrounding area.


According to the German publication, resentment is now growing in the carmakers’ executive suites. An anonymous car executive said they are worried that there will soon be “traffic jams at the columns.” At BMW, the word is that Ionity’s plans are “too unambitious.” But probably the sharpest point came from the German carmaking giant based in Wolfsburg: In December 2020, VW Group CEO Herbert Diess reportedly told management during a video Q&A session that the company was very satisfied with its own charging network in the US, whereby VW was obliged to found Electrify America as a requirement after the diesel scandal. In the USA, Electrify America established the leading charging network for electric cars there, second only to Tesla. In Europe, on the other hand, at the Ionity joint venture, nobody is satisfied with the result and the targeted number of charging stations is already one year behind.

At this point, it must be said that the comparison between Electrify America and Ionity is misleading. The group has invested the aforementioned 200 million euros in the European joint venture. However, in Electrify America, VW was obliged to invest the sum of two billion dollars by court order.

Since Volkswagen itself warned urgently in November of an “impending charging gap,” patience at the company headquarters in Wolfsburg is apparently finite: Diess is said to have said in front of the managers, “we will invest there ourselves if necessary.” Discussions about a VW stand-alone venture took place earlier before the decision was made favouring the joint venture after all, albeit still under the leadership of Diess’ predecessor Matthias Müller.

Reports of the group’s plans to create an exclusive fast-charging network independent of Ionity surfaced last summer. In January, another report said that Audi, Porsche and Ionity had already agreed on a joint fast-charging network “that would promptly pamper discerning customers with additional services such as a charging guarantee and with convenience features such as wireless conductive charging.”

According to Manager Magazin, nothing has been decided yet. Audi and Porsche are apparently pushing ahead with their own plans. They are dividing up the project internally, while one company is taking care of the city centres that have been neglected by Ionity so far. The other is looking after the longer-distance roads. This is likely to focus heavily on the brands’ premium aspirations, which Manager Magazin claims Ionity is failing to meet. “Ionity has little to do with premium,” the magazine writes, quoting an anonymous person in managerial circles. The plan is for 200 of its own stations in Germany, Austria and Switzerland are to be combined with a mixture of “gastronomy and car dealers” to create “small brands”.

The role of Volkswagen Group Components has not yet been clarified: Thomas Schmall’s division developed, among other things, the 22-kW DC wallbox, the AC wallbox ID. Charger, but also the mobile fast-charging station. In addition, VWGC has recently fortified itself with the former Innogy eMobility boss Elke Temme.