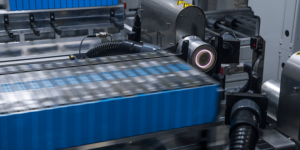 BMW has announced its intention to realise a solid-state battery suitable for automotive use in series production by the end of this decade. A first demonstrator vehicle with this technology is to be shown “well before 2025”. Funding is available from German federal and state governments.

BMW, who already received funding in the first battery IPCEI, wants to develop the Li-Ion cells of the “next but one generation”, including solid-state batteries, within the framework of the second IPCEI. The EU gave the go-ahead for the renewed funding in January. Now the German Federal Minister of Economic Affairs, Peter Altmaier, has symbolically handed over a funding notification to the Munich-based company at a virtual event. The Bavarian Minister of Economic Affairs, Hubert Aiwanger, also handed over a funding notification from the state.

In the statement issued by his ministry, Economics Minister Altmaier describes both BMW projects as “central to the further expansion of electromobility in Germany”. “With the joint European projects, it has been possible to successfully establish the battery value chain in Germany and Europe and to secure sustainable jobs,” the minister said.

For the electric cars of the ‘New Class’, which was announced in March during the annual press conference for the middle of the decade, BMW will first be developing the next generation of battery technology. “We want to significantly increase the energy density of the cells and reduce the costs of material use and production at the same time. We will also significantly reduce the use of primary material to ensure a truly ‘green’ battery,” says BMW CEO Oliver Zipse. For this then sixth generation of its e-drive technology, BMW is currently evaluating different cell formats, cell chemistries and also cell modules.


Another goal for the sixth generation: range and manufacturing costs should drop “to the level of the most modern combustion engines”. The fifth generation of cells is used in vehicles such as the iX3 and i4, which are to be delivered from this year.

In the then seventh generation, the energy density of battery cells should increase by at least a mid-double-digit percentage range, which should be made possible by the solid-state battery, although BMW does not say that the seventh generation of cells will exclusively have solid electrolytes. “We are doing intensive research on solid-state battery technology,” says BMW board member for development Frank Weber. “By the end of the decade, we will be implementing an automotive-compatible solid-state battery for series production.” While he announced a demonstrator vehicle for “well before 2025”, he did not give any technical details on solid-state cells.

On the other hand, US-based Fisker has put its solid-state battery plans on hold. “It’s kind of a technology where when you feel like you’re 90 per cent there, you’re almost there until you realise the last 10 per cent is much more difficult than the first 90,” said company CEO Henrik Fisker. “But you don’t really know that until you get up to the 90 per cent.” Solid-state batteries are “still very, very far away”, he added. However, Fisker also had much more ambitious timetables than BMW and VW.