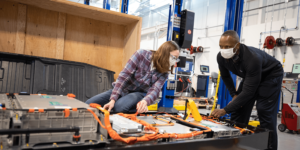 Ford is taking its first steps towards producing its own battery cells. The US carmaker has now announced that it will build a global battery centre of excellence called Ford Ion Park in southeast Michigan. Lithium-ion and solid-state batteries are to be developed and manufactured in small series there.

The 185 million dollar – equivalent to 153 million euros – research centre is to open at the end of 2022, according to Ford. Then lithium-ion cells and solid-state cells will be developed and manufactured at Ford Ion Park, and new manufacturing techniques will also be tested.

At Ford Ion Park, 150 specialists will contribute to Ford’s ability to “rapidly scale battery cell designs with novel materials in the future”. In addition, “aspects of the value chain” are to be optimised – from mining to recycling.

Although Ford is not yet planning cell production in larger quantities, the multi-million investment is a change in strategy: while other large carmakers such as its main competitor General Motors (in the form of the joint venture Ultium Cells together with LG Energy Solution) and now also Volkswagen, with the battery factories announced at the VW ‘Power Day’, are increasingly relying on their own cells and also participating in their production, the then CEO Jim Hackett had still said in September 2020 that Ford would not build its own cells. A decision that the new CEO Jim Farley has revised after only a few months.

The Ford Ion Park will be headed by Anand Sankaran, who has been working for the company for over 30 years. Currently, Sankaran is Director of Electrified Systems Engineering – so he brings experience in electric mobility with him. In this role, Sankaran was also involved in the development of the Ford Mustang Mach-E and the F-150 Hybrid.

“We’re already scaling production of all-electric vehicles around the world as more customers experience and crave the fun-to-drive benefits of electric vehicles with zero emissions,” said Hau Thai-Tang, Ford’s chief product platform and operations officer, according to the company’s release. “Investing in more battery R&D ultimately will help us speed the process to deliver more, even better, lower cost EVs for customers over time.”

An interesting side note is that InsideEVs recalls that Thai-Tang had still argued that investments in battery production could burden the company with “investments in obsolete technology” if there was a massive breakthrough in solid-state batteries under Hackett.

So far, Ford has relied on bought-in battery cells from different suppliers. The cells for the Mustang Mach-E come from LG Energy Solution and are manufactured at the plant in Poland and then shipped to the vehicle plant in Mexico where the electric SUV is built. It is not known which cells the Chinese-made Mustang Mach-E will use. However, the US carmaker plans to use cells from SK Innovation for the all-electric F-150 pickup. These cells are to be produced in the new plant in the US state of Georgia, which was part of the US legal dispute with LG.

Update 28 July 2021: The location for the announced Ford Ion Park has now been decided. The carmaker will build its global battery centre of excellence in the city of Romulus. Ford Ion Park will house up to “200 engineers, researchers, purchasing and finance managers”, the carmaker said in the latest announcement.

“The new lab will help Ford speed up the battery development process to deliver even more capable, affordable batteries and is part of Ford’s renewed commitment to making Michigan a centerpiece of its focus on EVs,” said Anand Sankaran, director of Ford Ion Park.

The city of Romulus is a suburb of Detroit. The city is home to the Detroit Wayne County Airport, the city’s international airport.