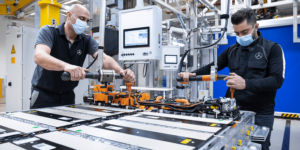 Daimler has confirmed plans to build a battery recycling factory in Kuppenheim, Germany. Although rumours about a planned battery recycling plant were abound before, the German automaker had given no indication of the location for the plant or further details until now.

According to Daimler, the start of production in Kuppenheim is “planned for 2023 – depending on the outcome of the promising discussions with the public authorities”. Daimler explained that: “We are currently also evaluating and planning the construction of a battery recycling factory in Kuppenheim, Germany, in order to create and secure recycling capacities and the related expertise.”

Kuppenheim is a town in on the far west side of the state of Baden-Württemberg, very close to the border with France and close to the Daimler heartland and headquarters of Stuttgart.

With the know-how developed in Kuppenheim, the automaker wants to prepare for the increasing number of batteries to be recycled. Daimler said that, with the estimated life-cycle of electric vehicles, significant quantities of material to be recycled will first be available in the 2030s. The company estimates that the larger numbers of vehicles that were delivered from 2020 will begin being ready for battery recycling.

The company has also said that the intention is to look at second life applications for the batteries before they are recycled since electric car batteries have proven useful in stationary storage applications beyond their functionality for mobility purposes. Daimler has not yet revealed details on the scope of the recycling plants activities.

A recent report from the local German newspaper Badisches Tagblatt, reports that Mercedes-Benz Group AG and Daimler Truck Holding AG have founded Licular GmbH, which will be based in Kuppenheim. The planned activities of Licular GmbH were already revealed in the company’s spin-off report, which is to regulate the separation of the Daimler Group in mid-December. Here it was written that: “In Licular GmbH, a newly founded battery recycling company, both Daimler Truck AG and Mercedes-Benz AG will each hold a 50 per cent share.”

In earlier reports, Daimler had only confirmed that it was planning a battery recycling plant at the Gaggenau factory, mentioning the Kuppenheim pressing plant, which is part of the Gaggenau plant, as a possible location for the pilot plant. However, there was talk that the later factory for recycling on a larger scale was to be built elsewhere for reasons of space, according to the information at the time.

On the subject of the Kuppenheim location, Badisches Tagblatt writes “In circles of local politics and regional planning, there are increasing signs that Kuppenheim once again has the best chances for the regular factory,” referring to operations to scale beyond the pilot plant. The site in question is said to be an 11.3-hectare area to the east of the pressing plant. Daimler has not yet confirmed these details.

It is also unclear how many jobs would be created in the pilot plant and the later regular factory. The mayor of Kuppenheim, Karsten Mußler, is said to have spoken in October of around 1,000 new jobs that could be created in the district if the project is “successful”. However, as Badisches Tagblatt writes with reference to company circles, Daimler rather assumes 50 jobs in the pilot factory and 150 jobs in the regular operation.

Including reporting by Sebastian Schaal, Germany