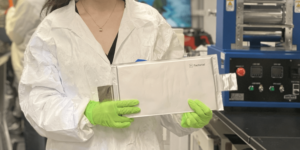 Mercedes-Benz and Stellantis have taken a stake in Factorial Energy, a US developer of solid-state battery cells. In addition to their financial participation, both carmakers have also agreed on development cooperations with Factorial Energy. Mercedes wants to launch a small series of batteries by the end of 2026.

Exactly how much Mercedes-Benz and the Stellantis Group are investing and what shares they will hold in the future is not clear from the announcement. Mercedes COO Markus Schäfer is only quoted as saying that they are investing a “high double-digit million amount” in Factorial. A statement from Stellantis is not known.

At this point it should be mentioned that the statement explicitly mentions Mercedes-Benz – so in view of the upcoming split of the Daimler Group, it is about the passenger car and van division, not the future Daimler Truck AG.

The solid-state battery developer had already announced a development agreement and a strategic investment with Hyundai and Kia at the end of October. No sums were mentioned then either.

As Factorial CEO Siyu Huang indicates, the partnerships are intended to “accelerate our ability to commercialise our core technology”. “With our new partners, we can develop batteries that not only enable safer, longer-range vehicles, but are also compatible with traditional lithium-ion battery production environments,” the executive said, according to her company’s announcement.

The US company had announced a 40 Ah cell with solid electrolyte this April, which is expected to help electric cars achieve 20 to 50 per cent more range. In July, the first results of the test runs were published. According to these, it was possible to achieve a capacity retention rate of 97.3 % for a 40 Ah cell at 25 degrees Celsius after 675 cycles. More current data are not mentioned. In the announcement of the entry of Mercedes and Stellantis, Factorial emphasises the “drop-in” compatibility of its technology, i.e. it should be easy to integrate into existing production facilities.

Mercedes-Benz says it plans to test the first cell prototypes next year. Within the next five years, the first use of the technology is to take place “in small series in a limited number of vehicles”, according to the Stuttgart-based company. Mercedes does not get more specific at this point.

The fact that Mercedes-Benz and Stellantis are acting in tandem in this investment in a battery specialist should also be seen against the background of the existing partnership: As reported, the German carmaker took a stake in the Franco-German battery joint venture ACC in September, which Stellantis (or its predecessor company PSA) had set up together with the energy group Total.

“With Factorial as our new partner, we are taking research and development in the field of promising solid-state batteries to the next level,” says Mercedes board member Schäfer. “With this cooperation, we combine Mercedes-Benz’s expertise in battery development and vehicle integration with the comprehensive know-how of our partner Factorial in the field of solid-state batteries. We share the common vision of CO2 neutrality.”

“Our investment in Factorial and other highly recognized battery partners boosts the speed and agility needed to provide cutting-edge technology for our electric vehicle portfolio,” said Carlos Tavares, CEO of Stellantis. “Initiatives like these will yield a faster time to market and more cost-effective transition to solid-state technology.”

US developer of solid-state battery cells Factorial Energy has closed a US$200 million (€176 million) financing round led by Stellantis and Mercedes-Benz. The carmakers had announced their financial stakes in Factorial Energy in December 2021 and agreed development collaborations with Factorial Energy.

The funding will be used to accelerate “commercial production and deployment of Factorial’s solid-state battery technology”, according to the company. “We continue to move aggressively towards our goal of delivering automotive-scale, solid-state battery technology to our customers,” said Siyu Huang, CEO of Factorial Energy. “This funding will enable us to not only advance core research and development, but also scale our team and invest in manufacturing facilities to drive commercial production.”