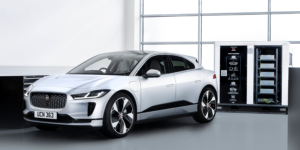 Jaguar Land Rover has developed an emission-free energy storage system in collaboration with the energy company Pramac, using second-life batteries from the Jaguar I-Pace. This is to be used when access to the public electricity grid is limited or non-existent.

Pramac’s Off Grid Energy Storage System is charged by solar panels and uses lithium-ion cells from previous prototypes and pre-production models of the I-Pace to provide zero-emission energy.

The storage system has an energy content of up to 125 kWh. Jaguar calculates that this could fully charge an I-Pace or – much more importantly in an emergency – supply a normal British family home with electricity for a week. According to the press release, the cells used for this purpose have mostly fallen below the 70 per cent mark of their original energy content. This means they are no longer fully suitable for use in vehicles, but can still be used in numerous “low energy situations”.

Jaguar supplies the vehicle batteries to Pramac. The Italian company installs up to 85 per cent of the vehicle battery in the new storage unit; modules and the wiring, for example, are reused 1:1. The 15 per cent that are not reused, such as the battery housing tailored to the I-Pace, are recycled.

In addition to the battery system, the Off-Grid Energy Storage System consists of a bidirectional converter including a control management system. The units, which are also rented out commercially, have a Type 2 connection and can charge electric vehicles with up to 22 kW AC. Jaguar announces that it will use the system itself at the Jaguar Land Rover Experience Centre in Johannesburg, South Africa, to “support power from the public grid, which fluctuates in phases”. In addition, Jaguar’s Formula E team has already used this storage during test drives – albeit not to charge the race cars, but to operate diagnostic equipment and as auxiliary power for the garage.

Jaguar wants to become a purely electric brand by 2025. Of the current models, only the I-Pace will survive this change, all other series will be phased out and replaced by electric cars on their own EV platform called Panthera. Last year, Jaguar Land Rover acquired a stake in the US recycling start-up Battery Resourcers.