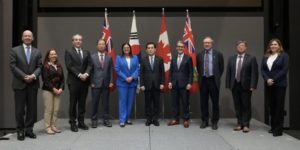 Battery manufacturer LG Energy Solution has signed cooperation agreements with three major suppliers in Canada for the supply of lithium and cobalt. The supply contract for cobalt sulphate is already binding, while the two lithium agreements still have to be finally negotiated.

A binding agreement with Electra Battery Materials secures LGES the supply of 7,000 tonnes of cobalt sulphate for three years from 2023. Electra is the only supplier that can refine cobalt sulphate in North America, according to the Korean announcement.

Previously, LGES had already concluded offtake agreements for lithium with Compass Minerals in the USA and Sigma Lithium in Canada. The focus on material procurement in North America is no coincidence: On the one hand, LGES is expanding its existing battery factory in Michigan and building new cell factories in Canada (together with Stellantis) and Arizona. As is well known, LG is also the battery partner of General Motors in the Ultium Cells joint venture, which is building several battery factories in the USA – so the demand for materials is high. On the other hand, batteries with primary products from North America are in high demand in the US due to the new EV tax credit regulations.

“As we have recently announced our mid- to long-term strategy to focus on North America, the fastest growing EV market, these partnerships serve as a crucial step towards securing a stable key raw material supply chain in the region,” says Youngsoo Kwon, CEO of LG Energy Solution. “By constantly investing in upstream suppliers and establishing strategic partnerships with major suppliers of critical minerals, LGES will continue to ensure the steady delivery of our top-quality products, thereby further advancing the global transition to EVs and ultimately to a sustainable future.”

In the averaging of materials agreements for North America, LG Energy Solution also cites that it has also ordered spodumene concentrate from Liontown Resources of Australia and also lithium from Vulcan Energy. Vulcan is also making efforts to extract lithium from geothermal brine in the German Upper Rhine Graben.