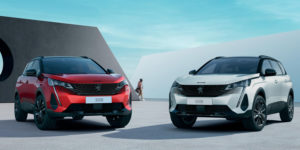 All Peugeot models will be available with electrified powertrains from 2023. Peugeot will be the first Stellantis brand to introduce the Group’s new generation of hybrid powertrains. The new powertrain will be used in the 3008 and 5008.

For the hybrid drive, a 100 kW gasoline engine is combined with a new electrified dual-clutch transmission. The 48-volt engine assists the combustion engine in providing additional torque and reduce fuel consumption by 15 per cent. At unspecified “low speeds,” the hybrid is also said to be able to drive up to one kilometre electrically.

Peugeot announces it will introduce the hybrid powertrain in other model ranges at a later date, but it will also be used in other Stellantis brands. The hybrid transmission, called ‘eDCT’, will be produced at the Stellantis plant in Metz, as part of the electric drive joint venture with Punch Powertrain. Production there is to be scaled up to 600,000 units by 2024, and later the eDCT will also be built at the Mirafiori plant in Turin.

The e-offensive is complemented by the already announced update of the e-208, which gets a slightly larger battery and a more powerful e-motor. The e-308 and e-308 SW are two further BEV models to be launched on the market; the e-308 SW is an electric station wagon. In addition, the all-electric e-408 will follow as announced as a new electrified model series.

Like Opel with the Vivaro-e Hydrogen, Peugeot will follow with the e-Expert Hydrogen, an FCEV variant of the van model. Peugeot will also present an electric solution in the two-wheeler segment: Peugeot plans to unveil the e-Streetzone electric scooter at the Paris Motor Show. It is said to offer a range of up to 112 kilometres – further details on the technology will probably not be available until the premiere.