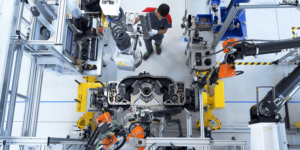 FPT Industrial, the powertrain brand of Iveco parent Iveco, has opened a new electric drive factory in Turin, Italy. At full capacity, it will employ about 200 people to produce more than 20,000 electric axles and battery packs per year.

The Iveco Group does not provide further details on the production technology or the possibility of further expansion stages in the announcement. Instead, it emphasizes that this will be the company’s first completely CO2-neutral plant. On a total of 15,000 square meters, the plant generates its own electricity with PV and wind turbines; the rest is purchased from renewable sources and compensated. And rather unusually for an industrial plant, more than 100 drought-resistant plants in a 6,000-square-meter hall are expected to absorb up to seven tons of CO2 per year.

“Iveco Group has set itself the challenging goal of reaching net zero carbon emissions by 2040, ten years before the deadline of the Paris Agreement. This applies equally to our products and to the places where we work to produce them,” says Gerrit Marx, CEO, Iveco Group. “From this plant we will supply e-powertrain applications that will complement an already extensive engine line-up, confirming our will to offer customers the right products and services to meet their rapidly changing needs and our credible ambition to lead the electromobility race.”