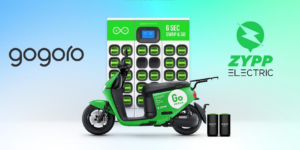 In India, Gogoro has announced a strategic B2B initiative and partnership with the EV-as-a-Service platform Zypp Electric. The two companies have teamed up to electrify logistics fleets and last-mile deliveries using Gogoro’s battery-swapping stations.

The Taiwanese electric scooter and battery swapping station manufacturer Gogoro expects to launch its B2B pilot with Zypp Electric in Delhi in December 2022 and be deployed to multiple fleet operators.

Zypp services deliver groceries, medicines, food, and e-commerce packages from point A to point B through their IoT and AI-enabled scooters. The company allows delivery riders and last-mile-delivery companies to rent electric scooters for their operations.

Since Zypp already has a cooperation agreement running with Hero Electric, this new cooperation with Zypp means that Gogoro now has access to two competing entities: Hero Motocorp and Hero Electric, the similarly named electric scooter manufacturers in India. Hero Electric is a new, purely electric scooter company, whereas Hero Motocorp is already 20 years old and made its first foray into electric vehicles with a cooperation agreement with Gogoro when the Taiwanese company announced its expansion into India in 2021. The newer, purely electric company, Hero Electric is named by Statista as the country’s leading manufacturer of electric moped scooters. Now both companies are connected to the Gogoro battery-swapping eco-system.

Partners are offered the use of Gogoro’s battery swapping stations, while the ‘Powered by Gogoro Network Program’ gives them access to Gogoro innovations and intellectual property, including its intelligent drivetrains and controllers, components and smart systems, so they can develop and roll out unique electric vehicles that integrate Gogoro Network battery swapping. This has the advantage for electric scooter owners, which in this case, is Zypp electric, that the electric scooters in its fleets will have a far longer use life by simply replacing the battery at the end of its useful life, which is considerably shorter than that of the electric vehicle itself.

Gogoro has appointed Kaushik Burman as the general manager of India for Gogoro. In his previous roles, Burman worked for Shell across North America, Europe and Asia, with the specific focus of commercialising cleaner energy solutions for B2B transportation segments. Gogoro says that Burman’s sector experience ranges from transport, energy and fintech verticals, and has been focussed on leading P&L and driving innovation.

Gogoro is taking its expansion into India very seriously. According to estimates, in the world’s second most populous country, two-wheelers and three-wheelers constitute about 83 per cent of all vehicles in India.

In India, Gogoro became a founding member of the India Battery Swapping Association (IBSA), which was formed by battery-swapping players in India. Gogoro says the IBSA has made significant contributions in the form of inputs to India’s upcoming Battery Swapping Policy and Standards.

This year, Gogoro completed its US IPO, expanded to Israel, finalised cooperation agreements with Yamaha, and joined forces with Foxconn to expand into Indonesia. Gogoro is entering the Chinese market with a joint venture to create a new Chinese brand.