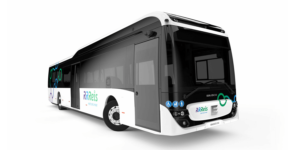 In the Netherlands, the Dutch public transport company EBS has ordered 31 Ebusco electric buses. This is the first order for the Ebusco 3.0 with a length of 13.5 metres and the first order that EBS has placed with Ebusco.

Ebusco is scheduled to deliver the 13.5 electric buses to EBS by the end of 2023. With 49 seats, the 13.5-metre-long model offers somewhat more space than the twelve-metre city buses that are otherwise common in Europe.

The Ebusco 3.0 is the latest model from the Dutch company, which was first presented in 2019 and is mainly sold in the twelve-metre variant or as an 18-metre articulated bus. Its lightweight chassis characterise the 3.0 and are intended to increase both the range of the vehicle as well as its lifespan. Ebusco has not yet revealed details about the battery and the drive of the vehicles and only mentions the 12 and 18-metre versions on its website, which the manufacturer claims have a range of up to 575 kilometres. The 12 and 18-metre versions come with 250- and 350-kWh battery packs, while the longer-range versions of these buses use packs of 350- and 500 kWh, respectively.

EBS currently operates in three regions in the Netherlands: Waterland, Voorne-Putten & Rozenburg and Haaglanden Streek. As EBS has recently won several new contracts, the workforce will be doubled from 1,000 to 2,000 employees in the coming year. The fleet is also expected to grow significantly, and EBS says that by the end of 2023, it will operate over 500 electric buses.

“We are happy and honoured to welcome EBS as a new customer. Together we can achieve our common goal of making public transport in the Netherlands even more sustainable,” says Steven van der Burg, Sales Director of Ebusco. Wilko Mol, CEO of EBS, adds: “We are very pleased to add the Ebusco 3.0 buses to our fleet. This is our first order with Ebusco, and we trust that Ebusco will meet all our expectations.”

This year has seen a veritable flurry of orders for the Dutch bus manufacturer. These have included both the older electric bus version, the Ebusco 2.2, that has seen orders in Europe this year from Munich, Rouen, and Barcelona, while the newer 3.0 version has been ordered in Sweden, Norway, and Denmark. In Germany, the national German rail service Deutsche Bahn confirmed a framework contract with the Dutch bus maker that will make it the main supplier of zero-emission buses in the period between 2023 to 2024, with an option for two more years. Ebusco has agreed to a call-off contract for around 260 Ebusco buses, for which Deutsche Bahn now has the corresponding concessions for the period 2023-2026. The maximum order volume agreed in the framework contract is up to 800 electric buses over the entire contract period.