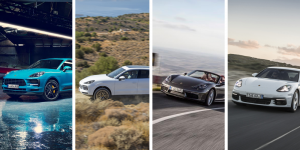 Porsche is accelerating their electrification plans and announced that between 2022 and 2025, a fully electric version of the Macan, Cayenne, Boxster and Panamera will be made available. As of 2027, only the 911 will drive with a combustion motor.

This plan has been reenforced with Porsche CEO Oliver Blume saying: “We have come to the conclusion that we would like our future to be diesel-free,” according to a press release.

In general, it appears that simultaneous development of combustion engines alongside electric drives may simply be too expensive for the smaller VW brand. This also applies to the plug-in hybrid versions, which is why only the 911 will receive PHEV variant. This news was broken by the Manager Magazin in Germany that also reported the plan to convert to a sales model where 75% of all Porsche vehicles sold by 2025 are electrified.

In July, the talk had been that Porsche plans to have every second vehicle sold electrified, and the number had been split between electric and hybrid transmissions at 50% of the production volume, each. This plan has now changed to something faster and more specialised.

Still, only the plan to electrify the Taycan in 2019 has been officially confirmed by the supervisory board, and the final decision for this rapid electrification plan will be decided this autumn, including more new vehicle provisions. A possible direction was presented at the Geneva Motor Show with the Mission E Cross Turismo, while an electric version of the off-road sedan Macan will also likely be approved. The electric Boxster, Panamera and Macan would then be released on the market somewhere between 2022 and 2025.

Under the title SPE, Porsche is also developing an electric construction platform for electric two-door sports vehicles. The platform may also see use by Audi and Lamborghini as well. Audi and Porsche are also developing the Premium Platform Electric (PPE) together, which will provide the basis for the electric Macan.

The e-mobility offensive will cost the German manufacturers billions, without a quick return on investment, which is why CEO Oliver Blume has also announced cuts in other sections over the next three years to save costs. He aims to reduce operating costs by six billion over the time period, which also corresponds to the planned investment price for the electrification.