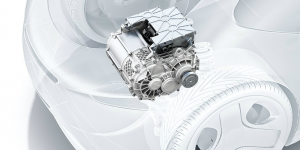 At the IAA in September, Bosch will show how all Bosch products for electric and automated vehicles integrate. The showcase is part of development cooperation with chassis and automotive technology expert Benteler. Also on show will be the IoT Shuttle.

With the rolling chassis as an electric technology platform, one of Bosch’s goals is to further develop products specifically for such requirements. Bosch is supplying the electric drive, steering, brakes, and other components for the exhibit. The company has not yet provided any further details on the platform.

In addition to the rolling chassis, other electric mobility technology will be presented at the stand. The German company will be demonstrating how Bosch integrates all its products for electric vehicles. Included are more efficient high-voltage solutions in the “eAxis” that will enable an increase in PHEV and BEV ranges. Besides, the supplier wants to present an intelligent thermal management system that will keep the battery and the interior in the optimum temperature range with a targeted distribution of heat and cold.


While Bosch boss Volkmar Denner rejected the production of battery cells some time ago, the supplier is pressing ahead with the production of fuel cells. Together with the Swedish company Powercell, Bosch intends to “industrialise” a fuel cell stack, as the communication states. In addition to the stack, Bosch is also working on other essential system components for FCEV. The supplier does not say when it will be ready for series production.

The German automotive and e-bike supplier will also be presenting assistance and automation systems. This included the automated valet parking system that Bosch and Daimler have installed in the Mercedes Benz Musieumparking garage in Stuttgart. This is claimed to be the first driverless (SAE Level 4) parking function to be officially approved. The automated valet parking service is activated per app, whereby the car parks itself without a safety driver.

Other products shown will include a front camera with image processing. Algorithms and AI can recognise and classify people, vehicles and objects, triggering a warning or emergency braking. Also presented will be radar sensors for capturing a vehicle’s surroundings, as well as motion sensors to give the precise localisation of vehicles.

Featured at the IAA will be the Bosch IoT Shuttle, a driverless electric vehicle for the urban traffic of the future. According to the company, its technologies can be used for automation, electrification, personalisation, and networking in such shuttles – both for transporting people and goods. Bosch gave a preview of this concept last year.