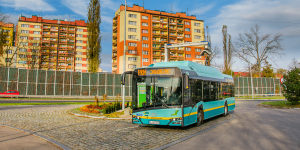 ACEA, the European Automobile Manufacturers Association, has published the registration figures in the EU for buses, trucks (from 3.5 tonnes) and vans in 2019 by type of drive. While the figures for buses and trucks have more than doubled, the electric vehicle segment has grown much more slowly.

In the field of electrically rechargeable vehicles (battery, fuel cell, range extender and plug-in hybrids), there were increases in all the vehicle categories mentioned compared to 2018: 170.5 per cent for buses, 109.2 per cent for trucks and 22.9 per cent for vans.

According to ACEA statistics, the share of electricity in buses is 4.0 per cent. Hybrid buses account for 4.8 per cent and those with alternative fuels for 6.2 per cent. The vast majority (85 per cent) are still diesel buses – but demand here fell by 3.1 per cent to 34,123 units. Four of the five major EU markets suffered losses for diesel buses: Spain (-13.8%), the UK (-12.0%), Italy (-11.8%) and Germany (-10.1%). France was the only market to show moderate growth (+2.4%) in the registration of new diesel buses. Gasoline engines continue to play no role: only eight such vehicles were registered in the EU as a whole in 2019. 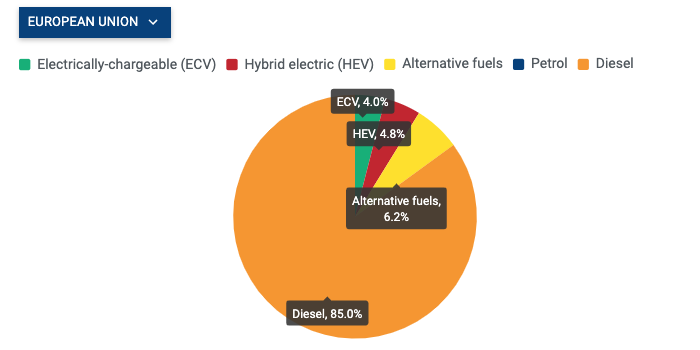 Last year, registrations of new electric buses in the EU rose by 170.5% from 594 units in 2018 to 1,607 buses sold in 2019, with the Netherlands (381 electric buses) being the strongest market, followed by France (285) and Germany (187). Together these three countries accounted for more than half of all electric buses sold last year, according to ACEA. Hybrid buses increased by 59.7 per cent to 1,918 vehicles, with Germany accounting for the largest share with 454 units. An interesting observation: the majority of hybrid registrations are concentrated in six countries – in 13 countries, however, not a single hybrid bus was registered.

While a certain market has now developed for electric buses (we regularly report on various tenders and deliveries), the proportion of electric vehicles in trucks is still significantly lower. Diesel still accounts for 97.9 per cent of the market here in the ACEA statistics. Electric trucks account for 0.2 per cent, hybrids for 0.1 per cent and alternative fuels for 1.7 per cent. With the exception of Italy (-9.5 per cent), demand for diesel vehicles increased in all major EU markets: Great Britain (+ 10.2%), Germany (+ 3.0%), France (+ 0.8%) and Spain (+ 0.3%). 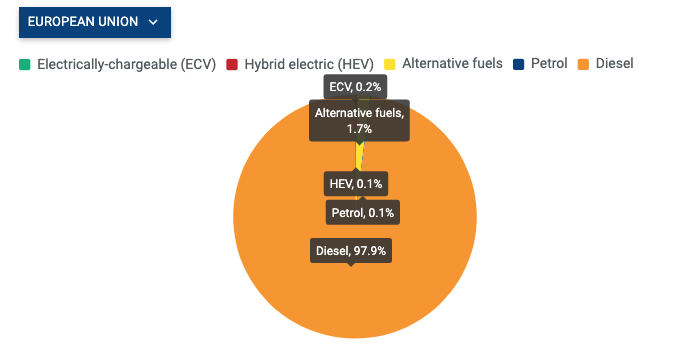 The growth in electric trucks – 109.2 per cent after all – for ACEA is also due to the small basis for comparison: registrations only rose from 357 electric trucks in 2018 to 747 units. The main markets for these vehicles were Germany (608 units), the Netherlands (76) and France (24), which together accounted for 95% of all ECV truck registrations last year. Not a single ECV was registered in 12 EU countries. Sales of hybrid trucks even fell by 10.8% to 272 units.

However, what ACEA does not mention about the low e-market shares for trucks is that, unlike buses, there are only a few models on the market. In the case of the electric buses, operators can choose between various European and international manufacturers and can select vehicles that are precisely tailored to their needs. In the case of the electric trucks, many models are still undergoing fleet trials and practical tests and often not yet freely available on the market. However, the requirements for electric trucks are also higher than for buses with a clearly defined daily area of application.

There are also big differences in the use of electric transporters – from long-distance transports that are difficult to calculate to inner-city delivery operations. The 22.9 per cent growth of the electric vehicle share in the van segment (diesel still accounts for 92.8 per cent here) to a market share of 1.2 per cent is primarily attributable to two countries: France (8,087 units) and Germany (6,704 units) were the largest markets for electric vehicles last year. Together they account for almost 60 per cent of the newly registered 26,107 electric transporters. 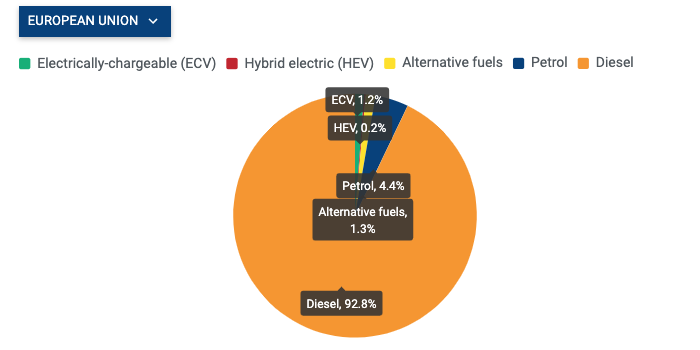 In 2019, 4,577 new hybrid transporters were registered, 159.8 per cent more than in the previous year. However, this triple-digit growth was mainly due to a low basis for comparison. In fact, hybrids accounted for only 0.2 per cent of all light commercial vehicles sold in the EU.