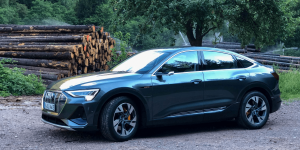 The new plug-in car registrations have come out for Norway. Market shares look impressive as usual in Europe’s EV wonderland. Electric cars make for over half of all sales in the first month of the year. Still, there’s been a slight decline.

5,461 new electric passenger cars were registered in January across Norway, making for a market share of 53 per cent. In addition, there were 2,848 new plug-in hybrids. Norway’s most successful electric model in January was the Audi e-tron with 734 new registrations.

While registrations of new electric cars increased by the aforementioned 28.9 per cent, a total of 7.7 per cent more vehicles (10,301 cars to be exact) were newly registered in January 2021 than in the same month last year. The growth of the overall market is mainly due to electric cars. Other Norwegian statistics also illustrate this: in January 2020, the market share of pure petrol cars was 11.0 and diesel 11.4 per cent. In January 2021, these only came to 5.0 and 6.2 per cent respectively.

2,848 plug-in hybrids joined the 5,461 BEVs in Norway in January. The partly electric vehicles thus had a market share of 27.6 per cent last month. Compared to January 2020, PHEVs made a gain of 48.4 per cent. The “non-rechargeable” hybrids, on the other hand, full-hybrids or HEVs, fell by 33.9 per cent and only accounted for 836 new registrations. Simultaneously, the HEV market share of 8.1 per cent was still higher than that of the diesel and petrol models.

However, if BEVs and PHEVs are added together, the market share in January was an impressive 82 per cent. 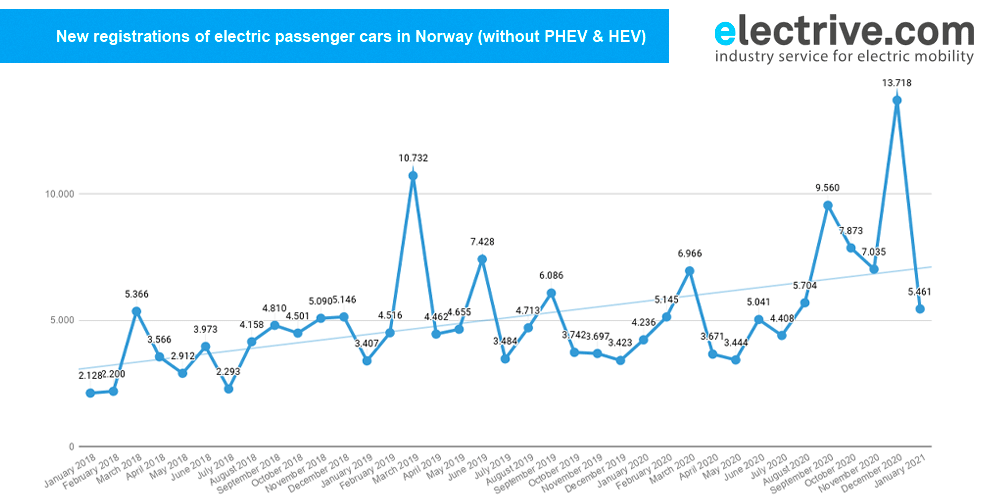 In terms of models, the Audi e-tron was again in the lead, which was also already the best-selling model in Norway in the entire year 2020 across all drive types. However, the e-tron cannot take the superlative title with its 734 new registrations in January, because the Toyota RAV4 was ahead with 812 units thanks to its PHEV drive.

However, for the two following models in the statistics – the Volvo XC40 with 528 units and the Peugeot 2008 with 498 – it is not broken down how many registrations are accounted for by the BEV and PHEV versions of the two models. In places 5 to 7, however, the drive system is clear: the Mercedes EQC (467 cars), the Polestar 2 (443 units) and the Nissan Leaf (334 units) come in next.

The fact that the Tesla Model 3, which was still the best-selling model in December, does not appear in the top 20 is no surprise given Tesla’s traditionally strong deliveries at the end of the quarter. The March figures will provide information on how the Model 3 performs every quarter. Obviously, however, no Volkswagen shipments were unloaded in Norway in January: The ID.3, which was ranked second in December and first in November, is also not included in the Top 20.