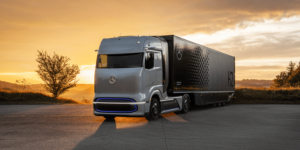 The Volvo Group will acquire 50 per cent of the shares in Daimler Truck Fuel Cell GmbH & Co. KG for the sum of approximately 600 million euros, Daimler stated. The partners expect to complete the transaction in the first half of 2021.

Daimler Trucks and the Volvo Group reached a preliminary, non-binding agreement. They had taken first steps to formalise the cooperation earlier this year as reported. The then newly founded Daimler Truck Fuel Cell GmbH & Co. KG bundles the Group’s fuel cell activities, including the former Mercedes-Benz Fuel Cell GmbH, which developed the drive system for the Mercedes GLC F-Cell passenger car model, among other things.

“For us at Daimler Truck AG and our intended partner, the Volvo Group, the hydrogen-based fuel-cell is a key technology for enabling CO2-neutral transportation in the future,” said Martin Daum, Chairman of the Board of Management of Daimler Truck AG and Member of the Board of Management of Daimler AG. Martin Lundstedt, President and CEO of the Volvo Group, added: “In the future, the world will be powered by a combination of battery-electric and fuel-cell electric vehicles, along with other renewable fuels to some extent. The formation of our fuel-cell joint venture is an important step in shaping a world we want to live in”.


The joint venture will focus on use in heavy-duty trucks, and the systems will also be offered for other applications, but so far, there has been no word on use in passenger cars. “Based on the demanding conditions in heavy-duty truck applications, the joint venture’s products are also ideally suited for other use cases such as stationary power generation,” the communication states.

Specifically, the joint venture intends to develop a system with several performance levels. One of these will be a “dual system with 300 kW continuous output for heavy long-distance trucks”. In about three years, both companies want to test fuel cell trucks in customer use. They plan to start series production in the second half of the decade.

In September, Daimler Trucks presented the GenH2 Truck, the concept vehicle for a fuel cell truck that is to go into customer trials in 2023. Here, too, they cite “the second half of the decade” as the period for series production. The concept vehicle’s unique feature is that the hydrogen will not be stored in gaseous form, but in liquid form at -253 degrees Celsius.

For the Swedish company, the joint venture with Daimler is not the only collaboration on electrified commercial vehicles. The Volvo Group has also entered into another strategic commercial vehicle alliance with Isuzu, including electric vehicles. In addition to a technology partnership, it also sees Isuzu takeover the Volvo subsidiary UD Trucks. This cooperation has a focus on the Asian markets.

Update 12 January 2020: The Rheinmetall Group is to become a strategic supplier of fuel cell components to Daimler Truck Fuel Cell. Through its subsidiary Pierburg, Rheinmetall plans to supply hydrogen recirculation blowers with a sales volume in the double-digit million euro range to the announced joint venture between Daimler Truck and the Volvo Group.

The component’s central task is to feed the hydrogen not consumed during the reaction in the fuel cell back into the stack. The blower thus increases the fuel cell’s efficiency, extends its service life, and improves cold-start behaviour.

Update 9 February 2021: The joint venture has now received the green light from the EU Commission. The Commission announced that it had come to the conclusion that the transaction does not raise any competition concerns.