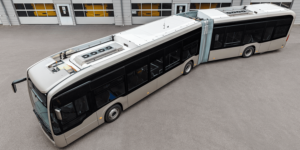 There are issues with the solid-state battery buses Daimler delivered to the city of Wiesbaden in February. The 21 Mercedes-Benz eCitaros have been out of service for a good two weeks as their batteries are undergoing checks due to an insulation fault that could lead to short circuits.

Daimler Buses revealed more in response to an inquiry from electrive.net. Here it was said that the local transport operator ESWE has already had to do without the buses since 22 February. They stated online that the latest battery buses with solid-state batteries “could only be put into limited use until further notice due to a current vehicle recall by the manufacturer EvoBus/Mercedes.” The bus manufacturer made assurances that they were working on solutions to the problem.

There appeared to be a risk of a cell short circuit: “As part of our ongoing product monitoring, we have determined that there may be an insulation defect in the cell modules of Mercedes-Benz eCitaro vehicles with solid high-voltage batteries. Due to the insulation fault, a cell short circuit can occur within the battery,” the commercial vehicle manufacturer told our German colleagues at electrive.net. The solid-state batteries come from the French company Blue Solutions, whose technology approach we highlighted just the other day in the course of an in-depth interview with Blue Solutions’ CEO Jean-Luc Monfort.

According to Daimler, the “potential fault” affects a total of 30 eCitaro, including around 20 units in Wiesbaden. “On these, the solid-state high-voltage batteries are undergoing a check, and corrective measures are being implemented if necessary. Our customers were informed about this immediately and asked to take the corresponding vehicles out of service immediately.” Daimler Buses said that “The first vehicles are currently being delivered to customers again after the measure has been implemented, so there will be no long-term impact on the rollout or deliveries of the eCitaro with solid-state battery.”

Both Daimler and ESWE Wiesbaden also emphasised that safety is the top priority. Instead of a “limited use” of the solid battery buses, as formulated by ESWE on 19 February – which was still at the very beginning of the development – it turns out this has been a complete failure for two weeks since the delivery. A company spokesperson told us today that the buses are still out of service and that there is still no exact timetable for when they can be brought back into service. To bridge the gap, the transport company is now using older diesel buses that were actually intended for sale abroad. The sale has been postponed somewhat to compensate for the loss of the new e-buses.

The 21 buses with the innovative battery technology based on a solid electrolyte onboard only arrived at the beginning of February. They are part of an order for 56 eCitaro ordered in 2019. Ten examples of the eCitaro with classic lithium-ion technology are already in use at ESWE. The 21 e-buses delivered in early February were the first 21 of 41 ordered with solid-state batteries. By the end of 2021, a total of 120 battery buses from Daimler will be available for ESWE Verkehr.

While the Wiesbaden-based public transport operator is most affected by the recall, other transport companies also have to cope with the loss of some of the still rare examples. For example, the Munich transport company (MVG) put two eCitaro G electric bendy buses with solid-state batteries, into service in January. In a statement, MVG announces that the two buses used on Line 100 have been recalled. “According to the manufacturer, the reason is the fear that it could lead to overheating the vehicle battery,” writes the operator. The duo will be replaced by conventional buses with diesel or hybrid drive until they are put back into operation.

With reporting from Germany and France, Cora Werwitzke.