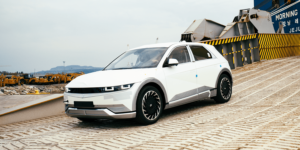 Hyundai will soon start deliveries of the Ioniq 5, which was presented in February, in Norway. Several hundred examples of the 800-volt electric vehicle of the special model ‘Project 45’ have already been shipped there.

According to the Norwegian Hyundai importer, the first transport ship with the electric model built in South Korea has docked in the port of Drammen. These are said to be “several hundred” Ioniq 5s, so deliveries of the special model will begin “in a short time”.

Hyundai had introduced the Ioniq 5 as the first model on the new E-GMP electric platform in February 2021. Subsequently, 3,000 units of the special model ‘Project 45’ could be ordered by customers from France, the Netherlands, the United Kingdom, Germany and, of course, Norway. The fact that the ship with the first vehicles for Europe is docking in Norway has not only to do with the international importance of the country for electric mobility but also simply with the demand: according to Hyundai Norway, 42 per cent of all ‘Project 45‘, which makes for almost 1,300 of the 3,000 vehicles, are going to the Nordic country.

A total of 14,000 interested parties have registered for the 800-volt BEV in Norway. It remains to be seen how many of these interested parties actually wanted to order a copy of the special model or put themselves on the waiting list for the freely configurable Ioniq 5. The ‘Project 45’ is only available with the large battery and all-wheel drive. Since the beginning of May, however, orders for the other drive variants with a small battery and rear-wheel drive have also been possible. According to Hyundai Motor Europe, 236,000 interested parties had registered in Europe within a week of the launch.

Hyundai Norway writes that the arrival of the Ioniq 5 was also a record in another respect: The transport ship ‘Morning Lady’ was the largest ship ever to dock in the port of Drammen.

For other European states, including Germany, no concrete delivery dates or the arrival of a transport ship are known yet. According to social media posts, some dealers, such as the generally well-positioned Autohaus Sangl from Landsberg am Lech in Germany, are preparing for the arrival and registration of the first vehicles.

The Hyundai Ioniq 5 has been launched and priced for the Australian market with a starting price of A$71,900 before on-road costs. An initial allocation of 400 units has been secured for the local market. The vehicle will initially be offered in just one trim level with two available powertrains.

Sales of the vehicles will take place through 10 curated dealers ,known as ‘Delivery Partners’, while servicing can be done through 32 ‘Hyundai BlueDrive’ dealers around Australia.