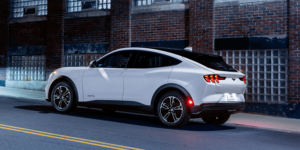 In Norway, 6,731 new electric cars were registered in July, setting the EV share in new car registrations at 64 per cent last month. Norway’s most successful model across all drive types was the Ford Mustang Mach-E with 898 new registrations.

According to the Norwegian Road Information Authority (OFV), a total of 54,801 electric cars were newly registered in the current year, which corresponds to a market share of 58 per cent.

The 6,731 electric cars were joined by 2,166 plug-in hybrids in July, with a market share of 20.6 per cent. Therefore, 84.6 per cent of all new passenger cars in Norway in July had an external charging connection, while the market shares of pure petrol and diesel cars continued to fall – to 4.3 and 4.1 per cent market share, respectively.

Across all drive types, the Ford Mustang Mach-E was the best-selling model in Norway. The E-SUV of the American manufacturer came to 898 new registrations in July. However, the June leader, the Tesla Model 3 with 3,196 new registrations at the time, still came with four newly registered vehicles in July – Tesla is typically particularly strong in the last month of a quarter.

Nevertheless, it is possible to rank the Ioniq 5: if it comes in third, it will be between the Enyaq and the Toyota RAV4 (incl. PHEV) with its 478 new registrations. With the VW ID.4, another all-electric model follows the BMW X3 with 423 new registrations. However, in the case of the BMW, all variants are possible, from the pure combustion engine to plug-in hybrids and the purely electric iX3.