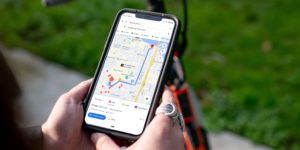 The providers hope that the cooperation will simplify “access to sustainable, electric transport” for customers. The integration in Google Maps is not only to help users to find the vehicle, but also to enable the customer to plan sustainable transport and travel.

When guiding a route, Google Maps will offer the option of selecting an electric scooter or an e-bike as the desired means of transport in the available cities. The cooperation will enable Google Maps to provide users not only with an overview of the nearest available e-bike or e-scooter but also how long it will take to walk to the vehicle, as well as the estimated battery range and expected arrival time. Users will then be directed to the relevant micromobility provider’s app to pay for the vehicle, unlock it and make their journey.

Spin vehicles will be shown by Google Maps in 84 towns, cities and campuses in the United States, Canada, Germany, and Spain. Spin was acquired by Ford at the end of 2018 and began its expansion into Europe in February last year.

Ben Bear, CEO of Spin says “Our goal is to make it as low friction as possible for consumers to plan multi-modal journeys. It needs to be just as easy, and even more convenient to get around with bikes, buses, trains and scooters as it is with a personal car. This collaboration with Google is our biggest platform integration yet with many more in the pipeline.”

Voi, the Swedish micromobility provider, was very specific about exactly where its electric scooters will be offered via Google Maps –all of the locations are in continental Europe: Berlin, Cologne, Düsseldorf, Frankfurt, Hamburg, Munich, Nürnberg, Stuttgart in Germany, Zurich in Switzerland, Milan, Turin and Rome in Italy, Oslo, Bergen and Trondheim in Norway, Stockholm, Gothenburg and Malmö in Sweden, Helsinki, Tampere and Turku in Finland.

Caroline Hjelm, Interim VP Growth, at Voi said: “The collaboration with Google is yet another door opener towards enhanced accessibility of our service and thus, a great contribution to create seamless and integrated mobility solutions together.”

Voi highly rates national and international mobility-as-a-Service (MaaS) platforms and recently published a study with Deutsche Bahn/S Bahn Stuttgart where digital integration in local MaaS app was identified as one of the driving factors in increasing train ticket sales.

In March this year, Bird announced it was going to double its fleets of electric scooters in Europe this year. Bird is headquartered in Santa Monica in the US state of California and says that this feature will be rolling out in all US cities where Bird operates.

Travis VanderZanden Bird founder and CEO said: “As demand for sustainable transportation increases, Bird is committed to meeting this need while simultaneously reducing street traffic in already congested cities and towns,” He explained, “We are making it easier for individuals to embrace new modes of eco-friendly travel and to ultimately eliminate our collective reliance on congestion-inducing, gas-powered cars – especially in urban settings across the globe where a majority of trips are under five miles.”