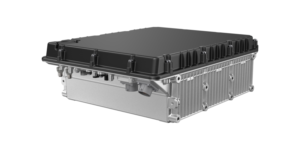 Valmet Automotive has introduced a modular battery platform for the electrification of off-highway and commercial vehicles. The Modular Power Pack is said to be suitable for all vehicles in agriculture, forestry, construction and mining. It is also suitable for the truck and bus segment as well as industrial applications.

The battery platform of the Finnish supplier is based on a cell-to-pack concept with LTO cells (lithium titanate oxide). It, therefore, has no modules, the cells are directly integrated into the battery pack. The solution is said to be robust against harsh and cold conditions and to score especially in applications that require high peak power, fast charging and a high number of charging cycles. Series production is scheduled to start in the third quarter of 2022.

“The Power Pack is a result of more than 2 years of intensive product development, testing and validation according to all relevant industry standards, with the involvement of some well-known industry players,” Valmet writes. It will be available in two versions from next year: One version supports 48-volt applications and integrates the Battery Management Unit (BMU). The other version is suitable for high-voltage applications and works with an external Power Distribution Unit (PDU), which in turn contains the Battery Management Unit. The housing – and therefore the space required – for the two versions is identical. Valmet emphasises that it is a plug-and-play solution that can be flexibly integrated in different locations of vehicles or machines.

“We have developed the Modular Power Pack as an industry benchmark solution and will start marketing it under our own name,” says Jyrki Nurmi, Senior Vice President EV Systems, Valmet Automotive. He added that interest from potential customers has already been signalled.

Valmet’s battery systems business is growing rapidly, according to the company. In recent months, the company has announced a total of five contracts (from Volvo Cars, among others) for the production of batteries. The batteries are manufactured in Valmet’s Finnish plants. To this end, the manufacturer is currently creating expanded or new production capacities in Salo and Uusikaupunki. The company is also currently building a battery assembly plant in Germany.