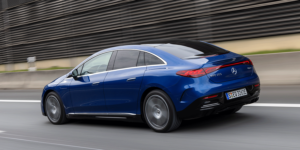 Beijing Benz Automotive (BBAC) has started production of the all-electric EQE in China. The EQE is now rolling off the production line at the BBAC plant in the Shunyi district of the Chinese capital Beijing. The batteries for the EQE are also produced by BBAC.

The premiere EQE was probably also an anniversary vehicle: it was also the four millionth vehicle to roll off the production line at the BBAC factory. According to the joint venture, it took 21 months to get from three to four million vehicles.

The report does not say which variants of the EQE will now be produced. In Germany, Mercedes started sales with the EQE 350+ and the Mercedes-AMG EQE 43 4MATIC – for the first press test drives, Mercedes had also made the all-wheel-drive model EQE 500 4MATIC available, but this variant is not yet available for order there.

The joint venture between Mercedes-Benz and BAIC is thus expanding its electric car range in China, which now includes the EQA, EQB, EQC and EQE. The EQE is thus the first electric model from the plant to be based on an all-electric platform. The EQE and the EQS (currently only built at Factory 56 in Sindelfingen) are known to use Mercedes’ EVA2 platform.

The battery cells for the EVA2 are supplied by the two Chinese cell manufacturers CATL and Farasis. In Europe, CATL cells are currently the main cells used. Whether this is also the case in China is not clear from the reports on the start of production of the EQE. What is known is that BBAC manufactures the battery packs itself from the purchased cells. Battery production for the EQE already started at the end of May. BBAC also assembles the batteries for the three electric SUV series itself.

In Germany, Mercedes assembles the batteries for the EQS and EQE at the main plant in Stuttgart-Untertürkheim, more precisely in the Hedelfingen plant section. From there, the ready-to-install batteries are transported to Sindelfingen (EQS) or Bremen (EQE). In the case of EQE, DB Cargo is taking over the battery logistics and has opened an Automotive Logistics Centre near the Mercedes plant in Bremen for this purpose.