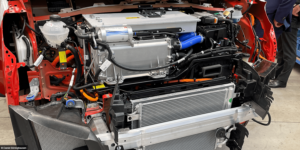 Stellantis has announced that it will now build hydrogen-powered fuel cell versions of the light commercial vehicles of the Peugeot, Citroën and Opel brands in series at a plant in France. Until now, the fuel cell vans were only available in a small series.

Thanks to new investments of 10 million euros in the Hordain plant and financial support from the French government, production of light commercial vehicles with fuel cells of the Peugeot Expert, Citroën Jumpy and Opel Vivaro models will be ramped up, according to the group. These vehicles will be assembled on the site’s multi-energy line, which already produces versions with electric and combustion engines. From 2024, the site is expected to have capacity for 5,000 vehicles per year.

Until now, the process was different: a battery-electric vehicle was manufactured in Hordain and then taken to Opel Special Vehicles in Rüsselsheim. There, in small series (i.e., up to 1,000 units per year), the BEV powertrain was removed and the fuel cell powertrain was installed. In the 15,000-square-meter production area, Opel employees were able to convert “several hundred units per year.”

The fact that this process could not be implemented cost-effectively for larger quantities was factored in from the start. Already in the summer, Stellantis said that the knowledge gained in Rüsselsheim, Germany, should be used for future series production at other plants – which is now happening.

In Hordain, the process is now different, although special steps are still needed for the Hydrogen versions: According to the Group, the platform of the fuel cell models is already integrated in the body shop at the plant “(…) the hydrogen-powered models will then follow the usual stages of paintwork and assembly, on the same production line as combustion engine and electric vehicles, before they enter the new 8,000-m² facility that focuses solely on the final tuning.”

From here on, the paths of the combustion engine and electric differ again compared to the FC vans: these enter a new 8,000-square-meter facility dedicated entirely to their final production. There, specially trained employees will then install the hydrogen tank, the battery and the fuel cells in the bodies prepared for this purpose – the platform for this has already been used in body construction. The new process is expected to halve the time needed to adapt the model compared with the Rüsselsheim small-series production.

The importance the group attaches to the step toward series production of the fuel cell models is also shown by the fact that Stellantis CEO Carlos Tavares has travelled to Hordain. “’m very proud of the work done by the management and employees at Hordain, who have made their site the first in the world to combine three types of energy, made possible by the flexibility of our manufacturing system,” Tavares said.

Incidentally, on the occasion of the production launch of the fuel cell vehicles, Stellantis is also providing an insight into the demand for the zero-emission vehicles to date: 43 per cent of the vehicles produced in Hordain are already electric. In addition to BEV versions of vans from Opel, Citroën and Peugeot, sister models from Vauxhall, Fiat and Toyota are also built there.

Mercedes is optimizing truck batteries for use in construction BEVs