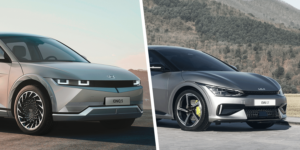 Hyundai and Kia announced a new strategy for e-mobility called ‘Rising Again, For China’. By 2030, the line-up in the People’s Republic will include 21 electrified models, including fuel cell and hybrid cars by both the Hyundai and Kia brands.

The Hyundai Group will simultaneously reduce the combustion engine portfolio in China from 21 to 14 ICE cars by 2025. For the 21 greener models, Hyundai and Kia have yet to release precise data, i.e. how many models of which drive they will offer. In the statement, the Groups states the plan to launch “exclusive electric car models every year” starting in 2022. Whether the exclusivity means fully electric or, for example, a premium PHEV is open at this stage.

Next year will see the launch of two all-electric cars in China, however, namely the Hyundai Ioniq 5 and the Kia EV6. Both share the Groups’ dedicated electric car platform and 800-Volt architecture e-GMP.

The new strategy “for China” is, of course, mainly for the Group. Hyundai and Kia sales in the world’s largest car market have not developed as hoped in recent years. South Korean media point to a political dispute between the two countries over a US missile defence system in South Korea in 2017. Hyundai-Kia has recorded weaker sales since then writes Korea Bizwire.

To make inroads in the new energy vehicle market as China classifies all electrified vehicles, Hyundai and Kia also look into hydrogen. The group began building a fuel-cell systems plant in Guangzhou and aims to produce 6,500 units a year starting in 2023 as reported. Other plants are planned for Europe and the US, with Hyundai currently producing its hydrogen system domestically in South Korea.

The fuel cells rely on Hyundai’s Nexo EV technology, which the brand apparently wants to launch in China before the year’s end. The Chinese government targets sales of one million hydrogen-powered vehicles by 2035.

Hyundai aims to produce half a million fuel cell vehicles and 700,000 hydrogen fuel-cell systems by 2030 as it aims for the lead in the global hydrogen vehicle market. The company also established a dedicated brand called HTWO.

The latter could be substantial in China. Volker Blandow, Global Head of e-Mobility at TÜV SÜD, recently told us, “What is happening in China in the fuel cell sector is huge”. Although the regulatory focus is on fuel cells in commercial vehicles, there were rollouts of fuel cell passenger cars in China every month, he said. Blandow, who lives in Bangkok, even entertained the possibility that the Chinese government could introduce a fuel cell quota. That would probably hit European OEMs currently fully committed to batteries, as hard as the quota for battery-electric cars once did.