The result of the Center of Automotive Management’s (CAM) ‘Electromobility Report 2022’ has Tesla once again emerging as the top innovator. The VW Group holds its own in second place but is unable to close the gap to Tesla. BYD is a newcomer in third place.

For the report, the research team led by study director Stefan Bratzel systematically recorded and evaluated the cumulative innovation strength of more than 30 automotive groups in the battery electric vehicle (BEV) sector between 2012 and June 2022.

Compared to the April edition (then with innovations until the end of 2021), Tesla was able to increase again from 175.8 to 188.2 index points. “Responsible are innovations in the field of battery cell structure, which enable a higher range of 16 per cent and reduce the cost per kWh by 14 per cent,” the release states. The Model Y was built in Texas with 4680 cells and structural battery packs. The CAM does not evaluate an innovation when it is announced, but only when it is available to customers in a production vehicle – which Tesla has now achieved with the 4680 cells.

The VW Group still managed to gain 12.2 index points in the first half of 2022, but it is not catching up with Tesla – the U.S. manufacturer’s lead has actually grown slightly by 2.6 index points. The higher MEB charging power of up to 170 kW and the improved range of the Skoda Enyaq RS Coupé of up to 545 kilometres according to WLTP were cited as innovations in the VW Group.

However, there has been a change in 3rd place: while this still went narrowly to Hyundai in April (76.9 index points to BYD’s 76.3 index points), the result is now clear: BYD gains 36.0 index points and is now the third manufacturer to achieve a triple-digit result with 112.3 index points. “Worth mentioning, in addition to cell-to-battery technology (CTB), are segment firsts such as the Denza D9, which has a range of 620 km (China standard) and a charging power of 166 kW. At the same time, innovations have been noted in other models such as the Yuan Plus, Tang EV and Han EV,” BYD states. 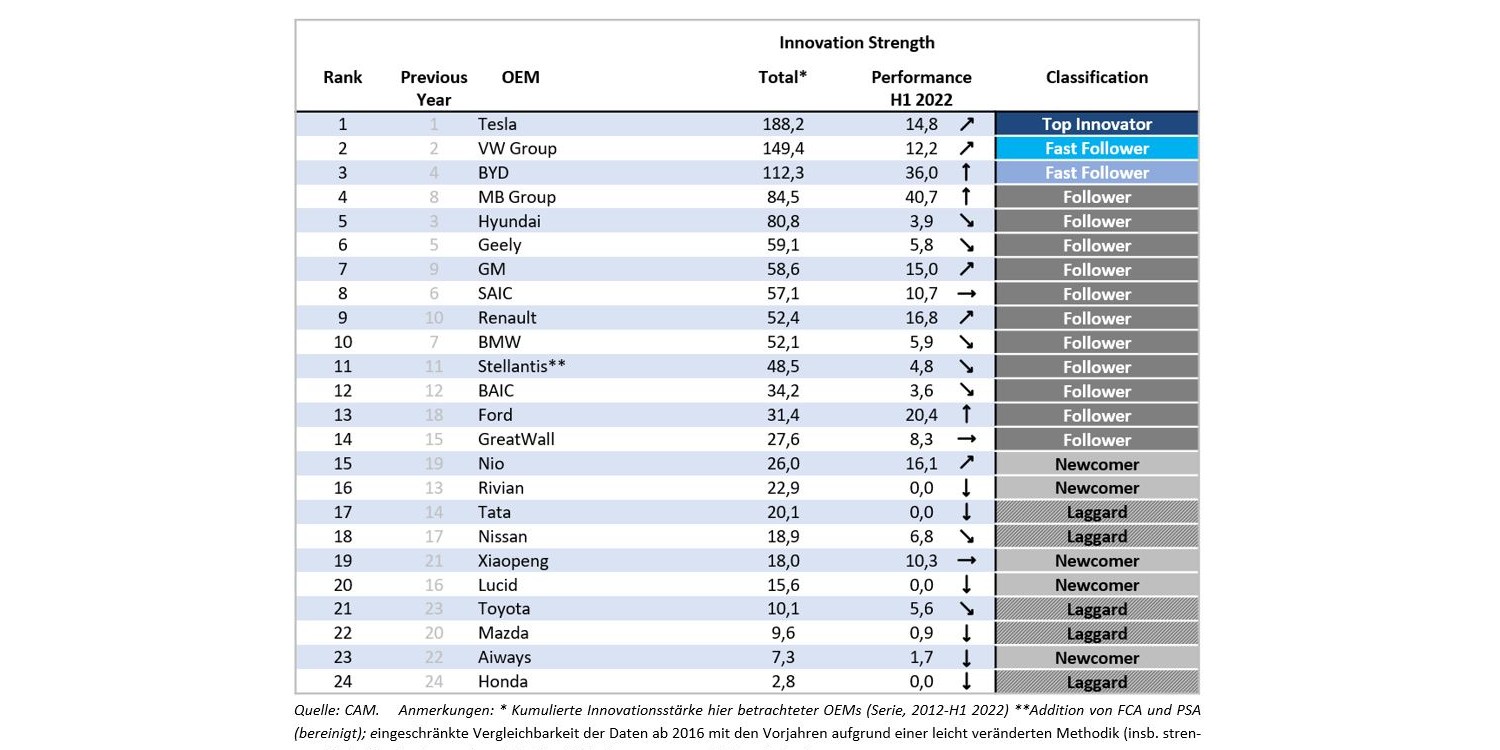 Hyundai dropped not only to fourth place, but continued downward to fifth place. The Mercedes-Benz Group now stands at fourth-place with a record increase from 40.7 index points to 84.5 index points – in April, the Stuttgart-based company was still ninth. According to the release, the EQE with its high WLTP range of 654 kilometers, “very good charging performance” and low consumption of 15.7 kWh/100km) was the main contributor to the result. Hyundai, on the other hand, only gained 3.9 index points to now 80.8. The revised Ioniq 5 with battery conditioning and also the new Ioniq 6 were not yet counted here, as they were not on the market by the cut-off date at the end of June.

The CAM also singles out Ford and Nio as “surprisingly strong” in the release. Ford gained 20.4 index points and is only 13th (up five places. Reasons cited include the high range of the Mustang Mach-E and F-150 Lightning. The best startup is Nio, where the ET7 and ET5 models are included and provide 16 additional index points – making it 15th with 26.0 index points instead of 19th. Rivian, which was still the best newcomer in April, did not record any innovation.

There has also been some movement in the field of “latecomers” – at least among some manufacturers. Mazda has improved from 8.7 to 9.6 index points, Toyota at least from 4.7 to 10.1 index points – but this still only lands it places at the bottom of the list of 25 companies. Only Honda continues to show no change: the Japanese are last with unchanged 2.8 index points.

“It can be seen that the innovative automakers in the field of battery-electric vehicles are also among the market leaders in e-mobility. This applies not only to Tesla, but also to Chinese automakers, for example, which are now also seeking market access in Europe,” says study director Stefan Bratzel. “The high level of innovation and often better delivery capability make the new players serious competitors for the established automakers. At the same time, the age of electromobility is increasingly changing the established hierarchy of the industry.”

Mercedes announces improved performance for hybrid A & B Class