For the report, the research team led by study director Stefan Bratzel systematically recorded and evaluated the cumulative innovation strength of more than 30 automotive groups in the battery electric vehicle (BEV) sector between 2012 and 2021. For the 2022 edition, more than 700 individual series innovations were evaluated, according to the release.

With an index value of 175.8, Tesla was able to further expand its leading position: The American company increased by 23.1 index points compared to 2021 and is thus the only carmaker to achieve the classification ‘Top Innovator’. According to the averaging, one of the developments that contributed to the increase in the index value is the range increase via software update for the Model 3 last year. At that time, the WLTP range was raised from 580 to 614 kilometres.

With 137.2 index points, Volkswagen is the only other manufacturer with a three-digit rating and thus leads the field of “fast followers”, but was only able to increase its score by 10.6 points compared to 2021. The gap with Tesla has thus widened. An example of innovation from the VW Group is the update for the Porsche Taycan, in whose all-wheel-drive the front electric motor can be almost completely disconnected to reduce power consumption – the all-wheel-drive model is thus even more economical than the rear-wheel-drive model. The software update 3.0 is not yet included, as only innovations up to the end of 2021 were included – so this will probably be preserved in the 2023 report.

Close duel between Hyundai-Kia and BYD

Third place goes to Hyundai-Kia by a narrow margin. With an index score of 76.9 points (+19.5 points), the Koreans just managed to beat BYD (76.3 points, +13.8 points). In the case of Hyundai-Kia, the Genesis models G80e and GV60, in particular, were cited for their DC charging performance. At BYD, the innovation gain was mainly due to the Dolphin electric small car, as it features an LFP battery with 800 volts. It remains to be seen how the duel between Hyundai-Kia and BYD will continue. The Korean company has models like the Kia EV6 GT and the Niro EV in the pipeline, while BYD is about to premiere the Seal, an electric mid-size sedan, and the 800-volt SUV Yuan Plus is already being sold in China.

The following places show that some manufacturers are catching up strongly. Geely in 5th place gained 20.9 points (driven by Zeekr and Polestar), SAIC in 7th place 22.7 points, BMW in 8th place even 25.7 points – a bigger gain than Tesla. BMW thus moves up five ranks from 13th place. The newly formed Mercedes-Benz Group in 9th place has gained 15.4 points. The outlier in the top ten is Stellantis in 6th place, where the increase in innovation was only 5.3 points. The innovation points of PSA and FCA were added together for the group, which will merge at the beginning of 2021. Real series innovations with the announced STLA platforms are only to be expected in the coming years.

Renault and General Motors, on the other hand, are slipping: While Renault drops 6 places to 11th despite the introduction of the fuel-efficient Dacia Spring Electric, US-based General Motors still comes in at 10th place instead of 6th last year, with just under 44 innovation points, despite an “unsatisfactory innovation performance in calendar year 2021” according to CAM. Improvements in the range of the Chevrolet Bolt EUV, Menlo EV and Buick Velite 6 EV have prevented “an even worse drop”, according to the statement. 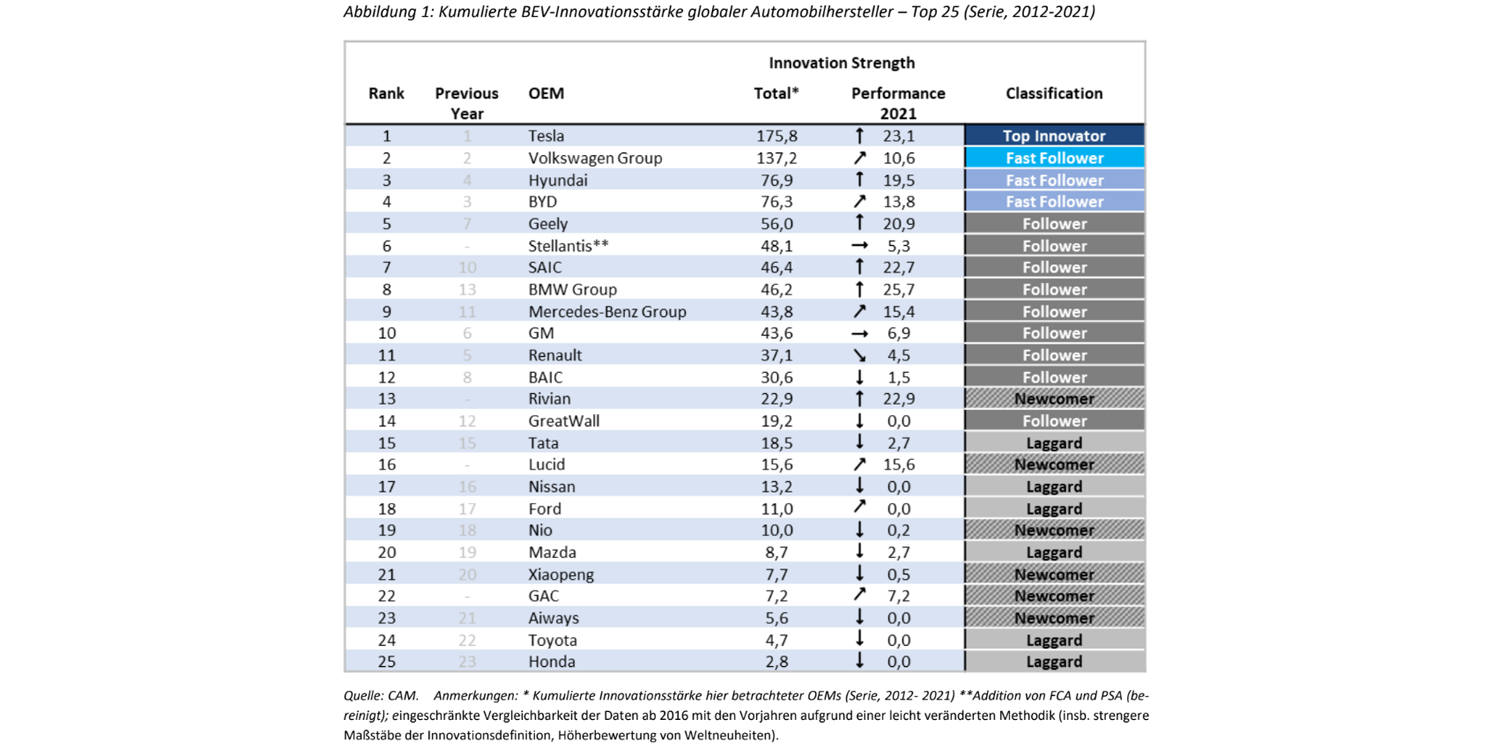 The remarkable thing is that the start-ups were thus ahead of strong-selling manufacturers such as Toyota and Honda, which occupy the last two places with 4.7 and 2.8 index points respectively. Consequently, they are classified by the CAM as laggards in electromobility. However, Toyota is set to debut the bZ4X as the first e-TNGA model this year.

“It is becoming apparent that the innovative car manufacturers in the field of battery-electric vehicles are also among the market leaders in e-mobility. This is not only true for Tesla, but also for Chinese car manufacturers, for example,” says Bratzel. “With the age of electromobility, the traditional industry structure and ranking of car manufacturers is increasingly changing. Here, too, the rule is that life punishes those who are too late.

Kia EV6 GT: On the road inside Korea’s answer to Porsche’s Taycan