This large Hydrogen project follows the first two ‘Important Projects of Common European Interest’ – IPCEI for short – already been launched for battery research and production. Companies such as BMW, Opel and Tesla, but also SMEs such as Manz and Varta received funding from the federal and numerous state governments. On the hydrogen front, last December, 23 EU countries agreed on the IPCEI Hydrogen, and companies could apply with their projects until mid-February 2021.

Now, in the mobility sector, the twelve selected hydrogen projects involved in the IPCEI concern the development and production of fuel cell systems and vehicles – from passenger cars to trucks to municipal vehicles. In addition, there is the funded expansion of a “nationwide and cross-border networked hydrogen refuelling infrastructure”. As yet, further details and scope have not been publically revealed.

The IPCEI goes beyond land transport: aviation and the maritime sector are also being promoted. These range from fuel cell vehicles for port logistics, to the H2 push boats in the port of Hamburg, to H2 vehicles starting with intralogistics at Airbus.

The list of mobility projects includes, for example, ‘Clean Hydrogen Coastline’ by the German company Faun Umwelttechnik. Faun already announced the series production of H2 commercial vehicles in 2020, primarily refuse collection vehicles and road sweepers. Faun was also funded for hydrogen projects by the Federal German government in 2019. ElringKlinger is to receive funding for the development of the ‘NextGen HD Stack’ – i.e. a fuel cell stack with high energy density.

The list also includes BMW with an unspecified project in Munich, Daimler Truck with the ‘Pegasus’ project in its truck plant in Wörth and also Cellcentric, the fuel cell joint venture of Daimler Truck and the Volvo Group. At the strategy presentation at the end of April, it was still said that the location decision for the large-scale production of fuel cells would be made by 2022, however, this decision looks like it has already been made judging by the diagram published by the German Federal Ministry for Economic Affairs where it is labelled as Project 53: ‘Fuel Cell Gigafactory, Kirchheim-Teck Region – cellcentric GmbH & Co KG’.

“We are making Germany a hydrogen country,” says Federal Transport Minister Andreas Scheuer. “In doing so, we are rethinking mobility, European and holistically – from the energy system to the drive technologies to the refuelling infrastructure.” Green hydrogen and fuel cells are “a super complement to pure battery vehicles across all modes of transport”. 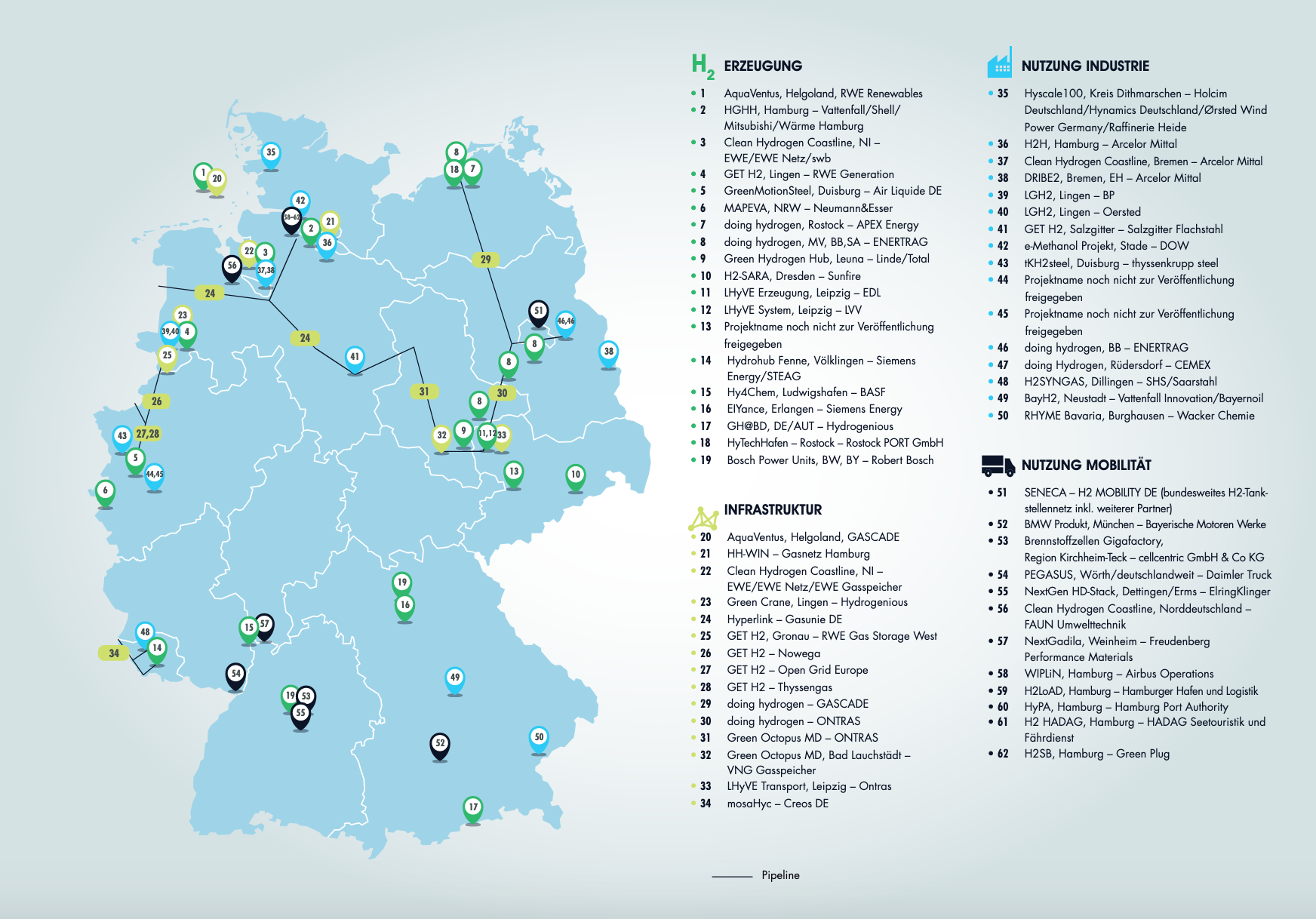 According to Scheuer, a “giant step” is being taken towards climate-friendly mobility. “The fact is: we urgently have to and WANT to push ahead with the changeover to climate-friendly mobility,” said the minister. “To cover all areas of mobility with zero-emission solutions, we need technology openness. That’s why we also support fuel cell technology as well as vehicle and component manufacturers so that we don’t miss the boat internationally.”

“A central area for this is the steel industry as well as the chemical industry, where several million tonnes of CO2 can be saved annually through these hydrogen projects,” says Economics Minister Peter Altmaier about the focus of the funding projects from his department. There, generation plants with a total electrolysis capacity of 2 GW are to be promoted, i.e. 40 per cent of the target of 5 gigawatts by 2030 set in the National Hydrogen Strategy. In addition, 1,700 kilometres of hydrogen pipelines are to be built. This is to supply steelmakers, for example: With ArcelorMittal, Stahl Holding Saar, Salzgitter Stahl and Thyssenkrupp Steel, all steel producers operating in Germany have submitted investment projects.

So far, the 62 projects and their state funding have not yet been approved by the EU Commission under state aid law. Only then can the funding notices be handed over and the funds actually be called up.

ElringKlinger has now provided details of its IPCEI application. The company had applied with the development of a new generation of fuel cell stacks and has now been preselected. The stacks are to be used primarily in the commercial vehicle sector, but also in buses as well as in maritime applications, on railways or as stationary units. In addition to development, series production of the stacks is planned. The subsidiary EKPO is to take over the implementation of the project.

Including reporting by Sebastian Schaal and Carrie Hampel, Germany.

Russia to invest $10Bn in zero-emission technology by 2030