According to the study by the Center of Automotive Management, Tesla continues to have a strong lead in terms of innovative strength in the period 2014 to 2018, followed by the Chinese manufacturers BYD and BAIC. However, Volkswagen Group is gradually catching up with the top three in the e-mobility sector and can overtake the manufacturers Hyundai and Renault.

The reason for Tesla’s strength is its long-range models – and since the study has included innovations since 2014, all of Tesla’s models, the Model S, Model X and Model 3, are included in the rating. The biggest “innovation” from the VW Group over the same period is apparently the Audi e-Tron. The update of the eGolf does not appear to have accounted for in many points in this regard. Overall, Volkswagen has made a jump from 11th to 4th place – but the Porsche Taycan that was presented this week is not included in the study.

This is the first time VW has achieved “high performer” status in the CAM evaluation – along with Tesla, BYD, BAIC (due to their models on the domestic market) and Hyundai, Renault and Nissan. Hyundai has scored well with the introduction of the Kona in 2018 with its low price and long-range of approx. 450 km according to WLTP being placed 5th. Renault also finds itself in the circle of high performers due to the Zoe, which is the best-selling electric car in Europe. Renault did not gain any innovation points in 2018 – but this will probably change in 2019 with the Zoe-Facelift and later with the announced other models. 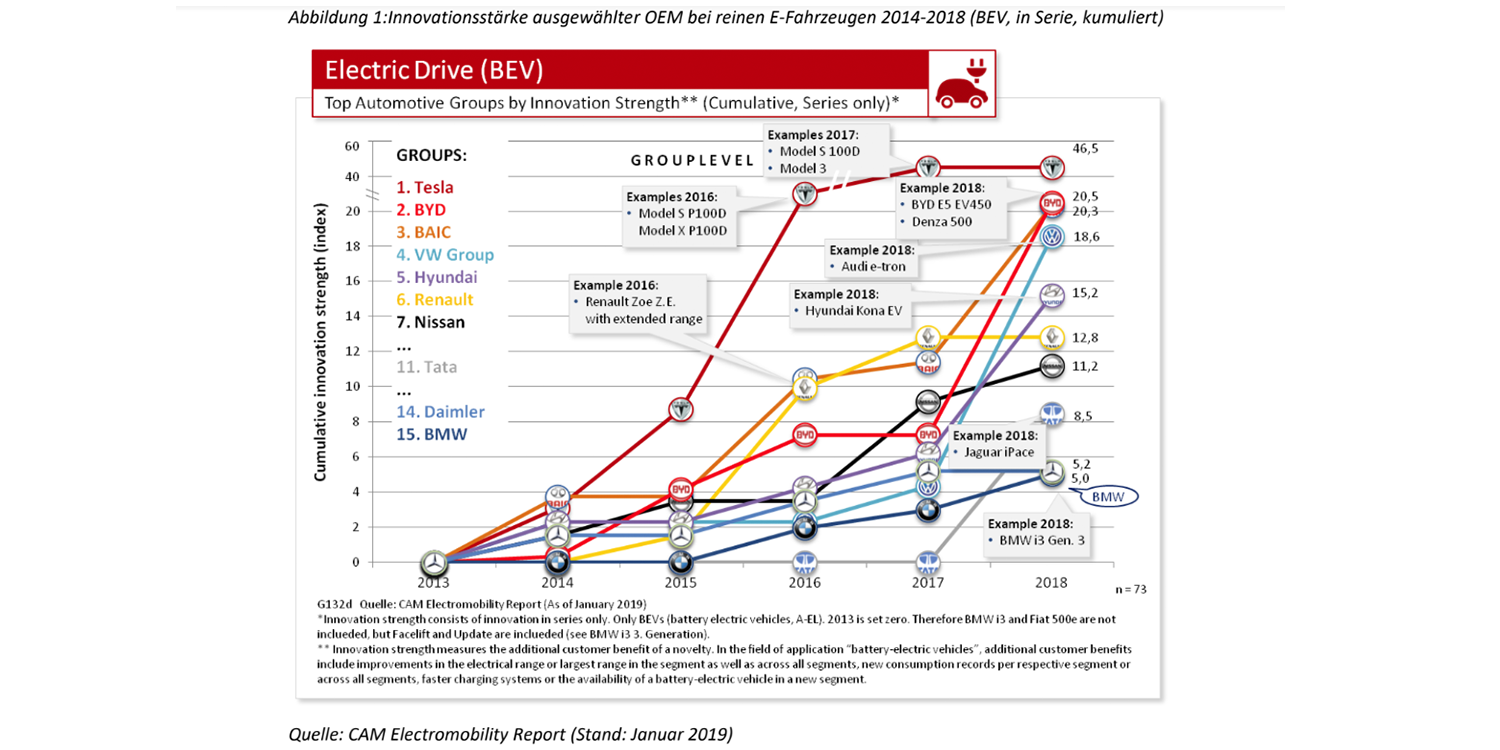 Daimler and BMW are still only in 14th and 15th place behind Chinese manufacturers such as Dongfeng and Great Wall, or Tata from India. Since the EQC, in contrast to the Audi e-Tron, was not launched on the market at the end of 2018, it was not included in the evaluation. Daimler was, therefore, unable to collect any innovation points in the BEV category in 2018. At BMW, there was only the update of the i3 to the 42.2 kWh battery.

Among the low performers are large corporations such as the Japanese OEM Toyota, Mazda, Mitsubishi, Honda, Subaru and Suzuki but also Ford and Fiat-Chrysler. These manufacturers have so far had few or no purely electric vehicles in their product range.

For 2019, the CAM expects “enormous inertia”. Owing to updates of the Model S and Model X engines as well as Superchargers V3, Tesla is likely to remain the most innovative manufacturer in the field of purely electric mobility. With the Taycan, Skoda Citigo e IV and Seat Mii electric, VW should catch up in the top 3 before the ID.3 counts for evaluation in 2020. Market researchers also expect a lot of movement at PSA, Daimler (Mercedes EQA) and BMW. 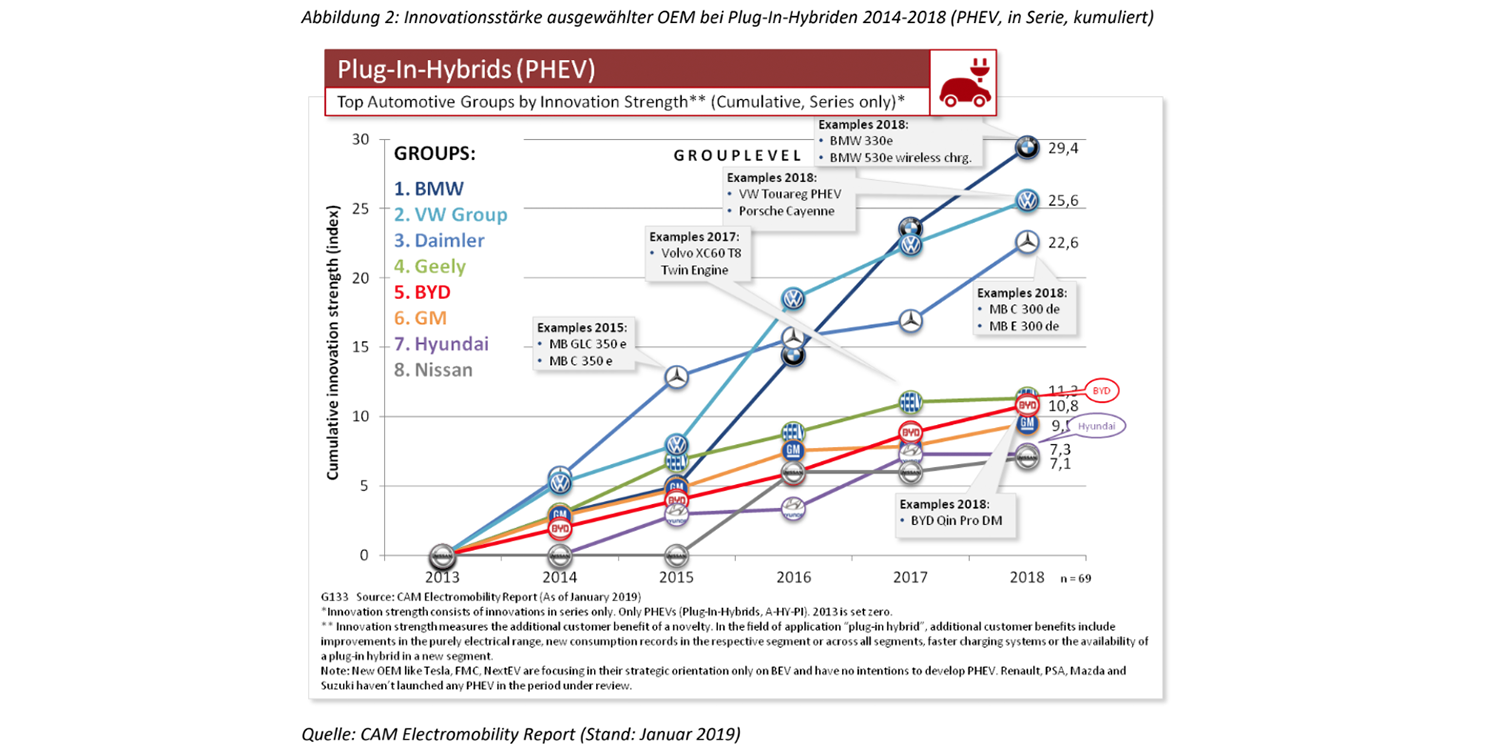 “At BMW it is particularly noticeable that after the pioneer model i3, the electrification of the model range was mainly driven by the focus on plug-in hybrids”, writes CAM in their report. This can also be seen when looking at the PHEV ranking list: This is where the Munich-based company leads with the 330e and 530e with wireless charging introduced in 2018. This is followed by the VW Group and Daimler, the latter of which has primarily collected innovation points with the diesel PHEVs in the C and E-Class.

Nevertheless, the CAM warns manufacturers and politicians not to overestimate the importance of plug-in hybrids. “With plug-in hybrids, there is a high discrepancy between the test bench values and the CO2 balance on the road,” says CAM Manager Stefan Bratzel. “Plug-in hybrids are only environmentally and climate-friendly if they have a corresponding user profile with low long-haul shares and consistent charging behaviour. Because there is hardly any real climate advantage at present, the existing high tax advantage cannot be justified”.

VW lowers the price of the e-Up in revised version