The latest CAM data for the electric car sector from Jan to April 2020 paints an uneven development. The study notices a strong increase in electric vehicles sales in Europe in general, the UK in particular, with an increase in PHEV cars in Germany.

Unique to this first quarter has of course been the Covid-19 pandemic. The comparison of figures in China in contrast to Europe marks a significant difference when looking at the effect of the Covid-19 epidemic and the impact this has had on electric car sales. While BYD data showed that more ICE cars were bought proportionately to electric cars. At the same time, China reduced its electric car subsidies in the middle of last year and has experienced a 46 per cent drop in BEV car sales in comparison to the same period last year. Here the CAM report also notes that since NEV subsidies and other support measures have since been increased in China repeatedly, one can expect these figures to pick up in upcoming quarters.

In Europe, however, plug-in sales already picked up. It was most notable in the UK where BEV sales made significant gains (+161 per cent), less so than PHEV cars (+31 per cent). This shows a marked increase, parallel to government subsidies to car sales and market share figures in the first two quarters of 2019. The UK has promoted both electric cars and electric vehicle charging infrastructure over the last 12 months which these figures may reflect. However, this week, in response to the Covid-19 crises, the UK government announced a £2 billion investment in green travel solutions that specifically target the transition from cars and onto less space and energy-consuming vehicles. This should affect an uptake in electric mobility that will not necessarily be reflected in electric car sales.


The development in France is also striking: between January and April, BEV car sales there rose by 97 per cent, and with 27,000 registrations, meaning that France is now virtually on a par with Germany in terms of battery-electric cars. The situation is different for PHEV cars: Here the increase was also 88 per cent, but absolute registrations rose only from around 5,000 to just under 10,000 e-cars. France revised its bonus-malus system in December, and since then the maximum bonus of 6,000 euros can only be received by BEV and FCEV cars – but not for plug-in hybrid vehicles.

Germany, however, has high PHEV car growth rates. Cumulatively, 63,000 BEV cars and PHEV cars were newly registered in Germany in the first four months of the year, which corresponds to a doubling compared to 2019. This growth was driven primarily by plug-in hybrid cars (+209 per cent from 10,000 to 32,000 registrations). However, the BEV car sales also showed an improvement, with a growth of 48 per cent – from 21,000 to 31,000 new registrations. The CAM study attributes this to the increase in electric-car subsidies at the end of February, but also to the growing availability of PHEV car models from German manufacturers that are considered suitable for company cars.

Overall in Europe, in the first quarter of 2020, new registrations of electric cars in Europe went up by 82 per cent, while total sales fell by 35 per cent (EU+EFTA+UK). The market share of pure electric vehicles went up to 4.3 per cent, that of PHEV cars to 3.25 per cent. New registrations of electric cars in the first quarter of 2020 have thus more than doubled from 3.1 per cent to 7.5 per cent compared to the same period last year, according to the CAM.

VW catches up with Tesla in CAM innovation ranking

Among electric car manufacturers, Tesla remains the most innovative electric car manufacturer. The CAM study attributes this to the innovative strength of the still-Californian company, that has continued to lead on CAM innovation rankings from 2012 to 2019. “However, the Volkswagen Group is catching up with Tesla in the field of e-mobility by taking big strides and jumping to second place (from 4th place) ahead of the Hyundai Group, which is advancing to 3rd place,” writes CAM. 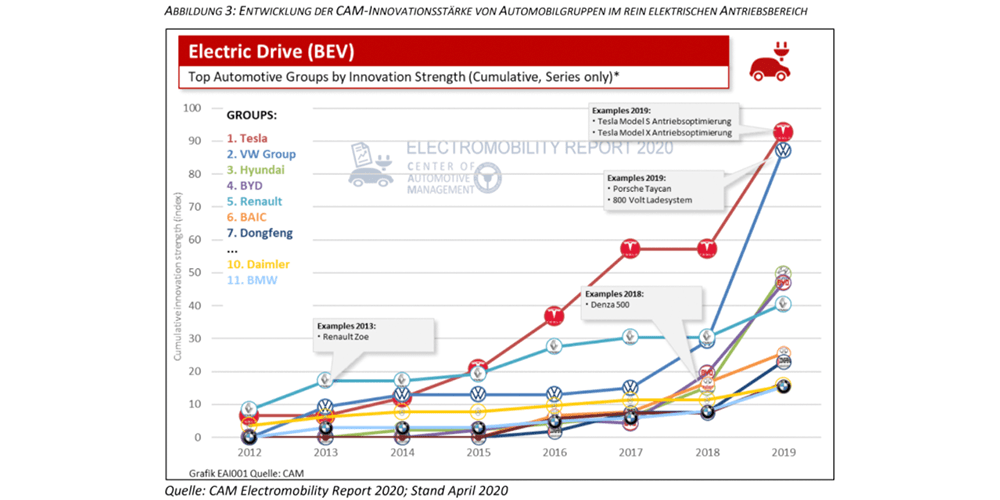 On the other hand, the Chinese manufacturers BYD and BAIC (4th and 6th place) have lost ground. CAM’s current evaluation of innovative strength takes into account 258 series innovations in electric cars from 30 carmakers over the last eight years. At this point, the focus on vehicles and the definitions of “innovation” must be taken into account. While Tesla has exclusively focussed on electric cars, for example, BYD and Hyundai have made progress in public transport vehicles and heavy-duty technology which is both potentially and currently relevant to personal mobility. Here too, innovation in the transition off over motorisation is not considered, such as innovation in the development and offering of vehicles smaller than cars.

While Tesla has gained a big lead over the competition in the car market since 2017 with the Model 3 and also proved its innovative strength in 2019 with the drive optimisations for the Model S and Model X (the Model Y will not count until 2020), Volkswagen was able to catch up strongly with the Porsche Taycan and its 800-volt system. Hyundai was able to overtake BYD with the facelift of the Ioniq (lowest fuel consumption in the vehicle class) and the Kia e-Soul (highest range and lowest consumption in the segment). Renault also scored points with the new 52 kWh battery in the Zoe but remains in 5th place in the CAM rankings behind Hyundai and BYD. Companies like PSA, Daimler and BMW all make some gains on this front. Still, among medium performers in car-technology innovation, companies such as General Motors are among the medium performers in innovation ranking places, falling from 9 to 11 place. In this regard, Nissan fell from 7 to 13 place and Great Wall from 9 to 17.

“It is evident that some established players have already taken up the challenge, while others still have much catching up to do,” says CAM director Stefan Bratzel. “In the wake of the Corona crisis, R&D efforts should be further focused, as hardly any manufacturer can cope with the parallelism of a large number of different drive concepts in the long term”.