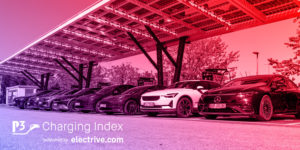 Summertime = travel time. But how do electric cars fare on the long haul? In this third edition of the P3 Charging Index, there was a new winner – for the first time, the electric car with the best long-distance performance no longer comes from Germany but from South Korea. It is not the only change in the EV range comparison compiled by the P3 Group in cooperation with electrive.

The result of the third edition after 2019 and 2021: no longer is one of the German premium models, the electric car with the longest range, but the Kia EV6. With an index value of 1.03, the 800-volt EV from South Korea is the first vehicle ever to achieve a Charging Index greater than 1.

The ideal charging behaviour, defined by P3 for the motorway, would be to charge electrical energy for a range of 300 kilometres (km) in 20 minutes – the P3 Charging Index thus puts consumption in relation to actual charging capability. P3 would rate an electric car that achieves this target with a Charging Index of 1. The EV6 even manages slightly more, while the second-placed Mercedes EQS reaches a value of 0.92.

Regarding the data, the electricity consumption for all models is based on the German car club’s ADAC EcoTest, as this test is always carried out under the same conditions on the test bench, which is the only way to ensure true comparability between the models. P3 measured all charging curves, and all tests took place this spring at similar temperatures. For the best possible comparability, the same charging pole type was used for all vehicles – with two exceptions: The Tesla Model 3 and Model Y were measured at Supercharger V3, as both models show the best charging performance here and reach their peak charging power of 250 kW. 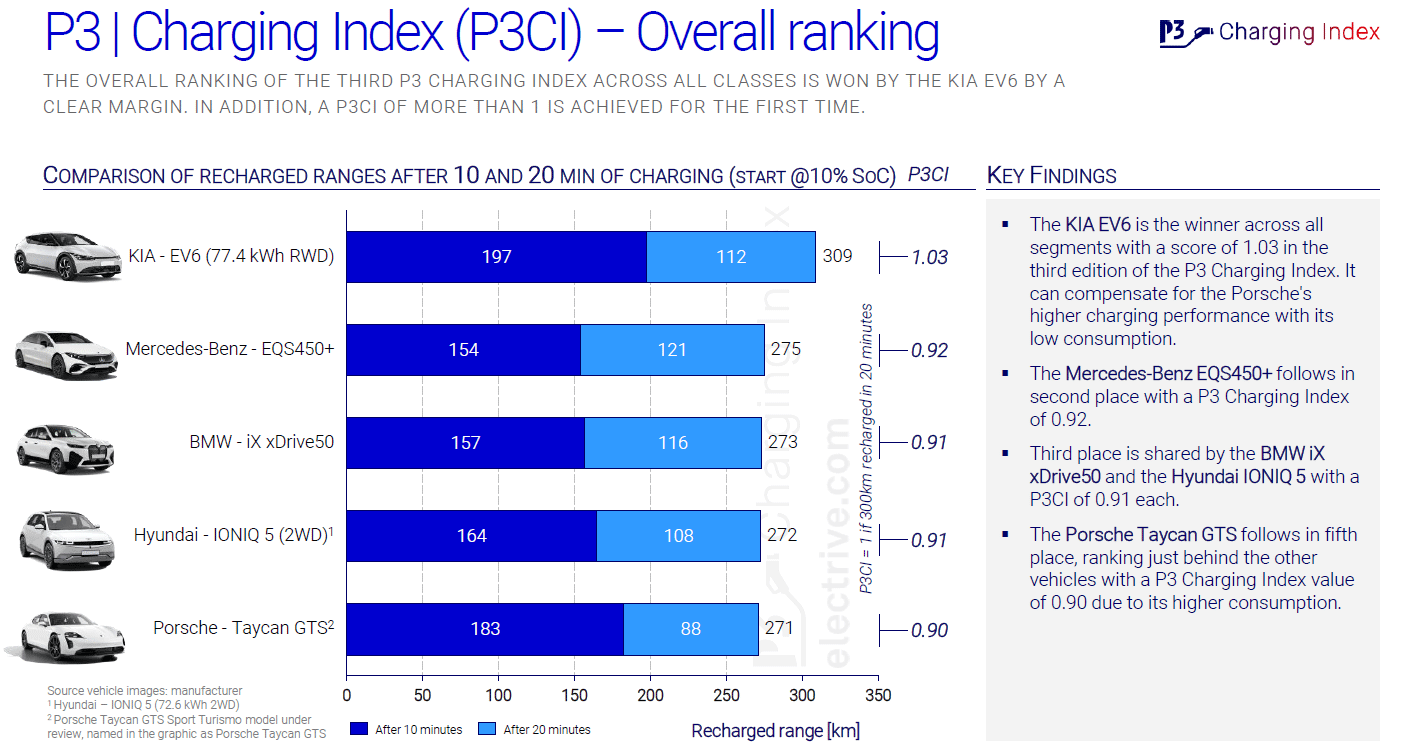 What is new in the third edition is that the ever-growing field of electric cars has been divided into three classes based on price categories: the lower class was set at 35,000 (the German environmental bonus sets €40,000). Thus models such as the VW ID.4 or Hyundai Ioniq 5 fall into the middle class. This puts them with comparable vehicles such as the Tesla Model Y and BMW iX3 and not in the compact class with a Fiat 500e or Dacia Spring.

Looking at the individual classes, the winner in the top luxury class for vehicles over 65,000 euros was the Mercedes EQS 450+. With a Charging Index of 0.92, Mercedes’ electric flagship is a razor-thin margin ahead of the BMW iX xDrive50 (0.91) and the Porsche Taycan GTS (0.90). After 20 minutes, the EQS 450+ has ideally recharged for 275 kilometres, the iX for 273 and the Taycan for 271 kilometres. Interestingly, all three models arrive at their final results in very similar ways: The EQS, which has been optimised for aerodynamics, does not win the class based on fuel consumption but due to its slightly better charging performance over the iX. Although the EQS is significantly more economical in the WLTP standard (16.1 to 20.0 kWh/100 km), the ADAC determined lower consumption for the BMW iX xDrive50 in the EcoTest: With 20.4 kWh/100 km, the electric SUV from Munich is ahead of the EQS 450+ with 21.5 kWh/100 km.

The EQS and the iX benefit from their large battery, each offering more than 105 kWh of usable energy. Although the peak charging power for the 400-volt models is the maximum 200 kW possible with 500 amps, they do not have to reduce power as much during charging, thanks to the large reserves. Compared to the Taycan versions previously rated in the P3 Charging Index, the Taycan GTS offers an improved charging curve and lower consumption, but it is still very close behind the two models mentioned in the index. With a 276 kW peak and 227 kW from 10 to 80 per cent on average, the Taycan can exploit its 800-volt system but has to regulate the power more (also due to the smaller battery with 83.7 kWh net). In addition, the EcoTest consumption of 23.2 kWh/100km is slightly above the values of the Mercedes and BMW, but the improvements in consumption and charging curve show the development of the model since its market launch.

Also, note that the Audi e-tron 55 quattro still offers a unique charging curve at this level; above 75 per cent SoC (State of Charge), it is the best model in the class and is still ahead of the 800-volt Taycan GTS and Audi e-tron GT models. Incidentally, the latter offers a minimally worse charging performance than the Taycan, but a Charging Index of 0.79 is set back by its high consumption in the ADAC EcoTest.

In the premium class, the Kia EV6 came out on top. With a Charging Index of 1.03, it is also the overall winner as mentioned above – after 20 minutes, it has recharged enough power for 309 kilometres. There are two reasons why it is so clearly ahead of its technical brother Hyundai Ioniq 5 (0.91, 272 kilometres after 20 minutes): The test still includes the Ioniq 5 with the 72.6 kWh battery, while the EV6 has had the 77.4 kWh variant since launch – this is noticeable in the charging power, with the EV6 averaging 203 kW and the Ioniq 5 192 kW leaving the competition behind. Point 2: With an EcoTest consumption of 18.6 kWh/100 km, the EV6 achieved the second-best result in the class. Only the Polestar 2 Long Range Single Motor was marginally better with 18.5 kWh/100 km. The Ioniq 5, on the other hand, landed in the midfield with 20.9 kWh/100 km. We are curious to see how the Ioniq 5 will perform in the new model year with the likewise 77.4 kWh battery and the aerodynamic Ioniq 6, which promises another 100 kilometres more WLTP range.

However, the model with the highest peak charging power in this class is the Tesla Model 3, which can only hold the 250 kW in the relevant range of 10 to 80 per cent for a very short time. Like the Model Y, the Model 3 Long Range has to cut back on power early on and is on a par with a BMW i4 eDrive40 or iX3 above 50 per cent SoC. From 10 to 80 per cent, that makes the Model 3 charge 146 kW on average – which is 4 kW better at Supercharger V3 than at the charging station type where all other vehicles were tested. Since the i4 with its 400-volt system is also just above the 200 kW mark and averages 136 kW, the electric sedan from Munich can move just ahead of the Tesla in the Charging Index thanks to its lower EcoTest consumption – the i4 comes in at 0.78, the Tesla at 0.74.

Also worth mentioning in this class are the Polestar 2, which comes close to the Model 3 without the inefficient all-wheel drive and with an improved charging curve (0.73) – however, the Model 3 Long Range, with its all-wheel drive, offers significantly more power than the Polestar with front-wheel drive. The Model Y falls behind the Model 3 with poorer charging performance and higher fuel consumption. The new Renault Mégane E-Tech EV60 has the third best consumption in the class but also the worst charging curve, with only 88 kW on average. Although the peak power is higher than that of the Mercedes EQA250, it has to be reduced even more and earlier. A note on the VW ID.4: The vehicle in the current Charging Index is still in software version 2.3. We have already been able to measure the significantly improved charging curve of software 3.0. Still, there is no current EcoTest with 3.0 software for the model – we will provide the ID.4 with improved performance in the next issue.

In the first two editions of the P3 Charging Index, vehicles with a score of less than 0.5 were not listed at all, as they were not considered suitable for long distances. However, the segment of electric compact and small cars has grown. And a look at the German registration statistics shows that models such as the Hyundai Kona Electric, the Fiat 500e or even the eCMP models from the Stellantis Group repeatedly appear in the top positions. Customers of these vehicles also ask themselves which model is best suited for the long haul. Since a Mini Cooper SE should not be compared with a Kia EV6, the cars up to 35,000 euros got their own class.

With a Charging Index of 0.51, the VW ID.3 with the 58 kWh battery comes out on top here – in previous editions of the Charging Index, the ID.3 Pro S with 77 kWh was always included as the most long-distance-suitable variant. The ID.3, also measured with the 2.3 software, recharged for 153 kilometres after 20 minutes at the fast charger. The MEB compact car is saved by its charging power of 104 kW at peak and 81 kW on average – because with 19.3 kWh/100km, the VW has the highest consumption in its class. With a decent but not outstanding charging performance (65 kW on average from 10 to 80 per cent), the Kona Electric takes second place thanks to the best-in-class consumption of 16.7 kWh/100km – with an index of 0.48.

In terms of peak charging power, only the Peugeot e-208 GT (representative of models such as the Opel Corsa-e) can keep up with the ID.3. Since the energy is more heavily regulated and also falls behind the Kona from around 50 per cent SoC, in combination with the second-highest consumption, only third place with 0.43 index points is possible. The Fiat 500e is efficient and starts charging very quickly, but then also has to cut back on power – makes 4th place with 0.41.

The four best-placed small and compact cars recharged between 123 and 153 kilometres within 20 minutes. The fifth-placed Mini Cooper SE (87 km, index value 0.29) and the Dacia Spring (59 km, 0.20) fall behind even in this class – a much longer charging stop would be necessary here. By the way: Only models with the CCS connection, widespread on motorways, were considered – the Renault Twingo and the Smart EQ models were therefore not examined.

Many charging curves and figures – but what do they actually mean?

Insight 1: As the overall victory of the Kia EV6 proves, having the largest possible battery and a WLTP range of over 780 kilometres, as in the EQS 450+, is not the decisive criterion. It is the mix of battery size, consumption and charging performance that counts. The best example: with the efficiency of the current BMW drives, even an e-SUV like the iX can achieve low consumption.

Insight 2: 800 volts are not a panacea. Although all four 800-volt models tested offer the best charging curve with values between 227 and 192 kW (the best 400-volt EV is the EQS with an average of 167 kW), without correspondingly low consumption, even the high charging power is of little help on the long haul – look at the ranking of the Audi e-tron GT, for example. And vice versa: an efficient car with low consumption is not automatically ahead in its class if the battery size and charging curve are not right – see Renault Mégane. But: to exploit the charging performance of 400-volt models with the maximum possible 200 kW, large batteries are needed.

Insight 3: The end of the line has not yet been reached. Manufacturers are not only developing new electric cars and platforms from the ground up but are also continuously refining existing models. This applies above all to the software, as Tesla has done with numerous updates. Updates increase the charging capacity and reduce consumption thanks to improved control of the inverters and motors or more efficient drive strategies (especially in the case of all-wheel drive models with two motors). We are curious to see how the 3.0 software in the MEB models of the VW Group or, for example, updates in the still young E-GMP platform from Hyundai-Kia will affect this in the future.

You can find the complete P3 Charging Index and methodology here.

Genesis reveals prices and specs for the GV70