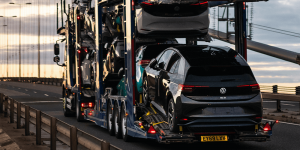 The full-year round-up of Western Europe’s plug-in car market sees battery-electric cars and plug-in hybrids entering the winning streak with every eighth car sold on average now boasting a plug and overtaking China in the segment. Simultaneously 2020 had been hailed as the year of the swerve, and it was. Only data suggests that exceptionally low conventional car sales had helped manufacturers reach their fleet emission targets. But, to the graphics painted by the data and 2021 predictions.

With 2020 seeing emission regulations tighten, manufacturers scrambled to meet EU (and Swiss) standards at the close of 2020, contributing to total plug-in registrations exceeding half a million units in the final quarter of the year. 2020 lived up to its claim of being the first genuine year where EVs moved from the slow hanging fruit lane to the mainstream, narrowly failing to miss a pre-COVID forecast of 770,000 units. 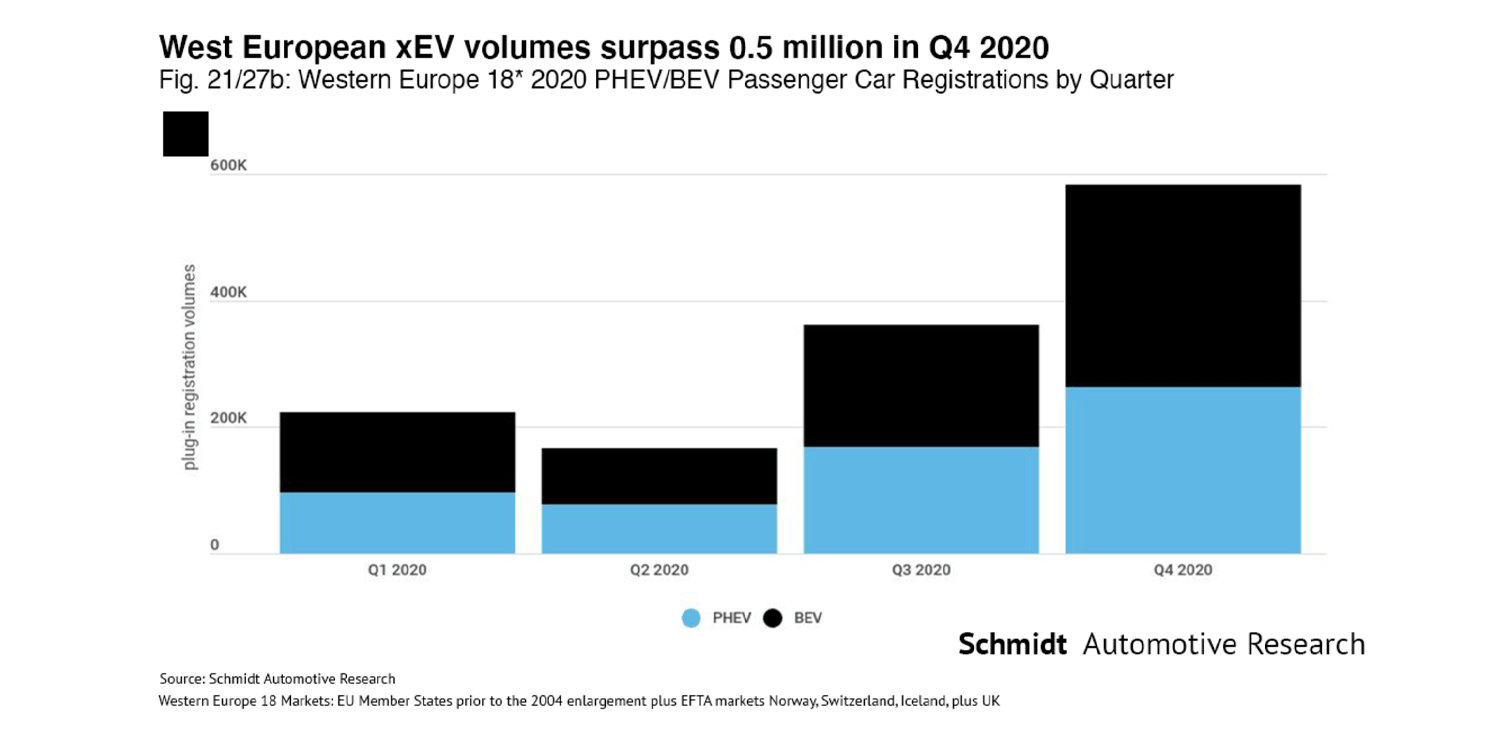 The pandemic’s grip on the total passenger car market, recording its lowest volumes since 1985, ironically contributed to BMW Group, PSA, Renault and Daimler all achieving their CO2 compliance targets last year, according to company data.

In terms of the top electric car manufacturers, only Volkswagen made it onto the list as a German carmaker and a volume one on top holding close to a quarter of the market and increasing their sales by about 244% YoY. Accumulated electric car sales through the Volkswagen Group stood at 173,943 BEV in 2020. 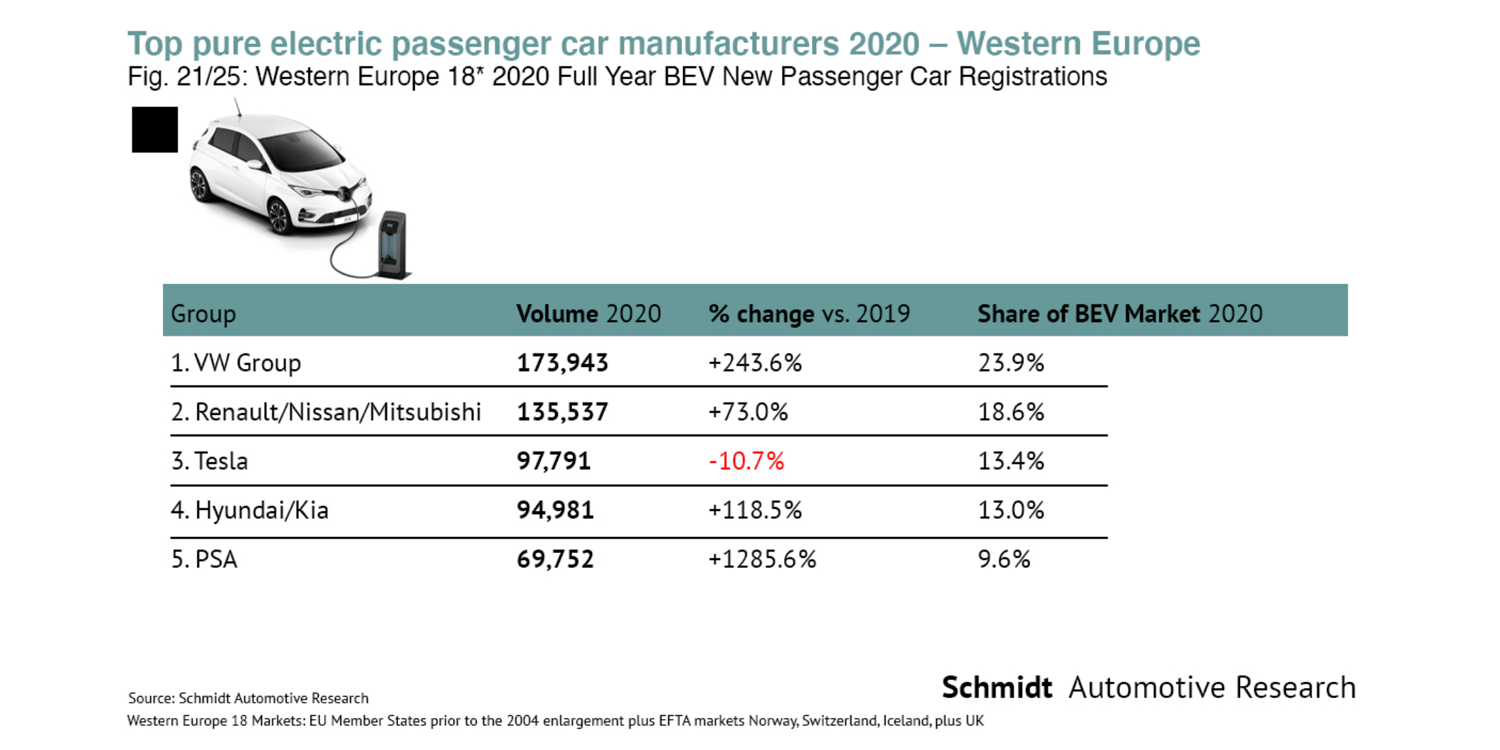 Regardless, Volkswagen Group revealed that they failed to meet their CO2 target, falling short by 0.5g/km. A company spokesperson told the author that it was likely contributed to by the ID.3’s delayed market launch, resulting from software issues delaying customer deliveries. VW still managed to come in third with the ID.3 after Renault and Tesla in the BEV segment with 55,003 units sold in raw sales data by model. 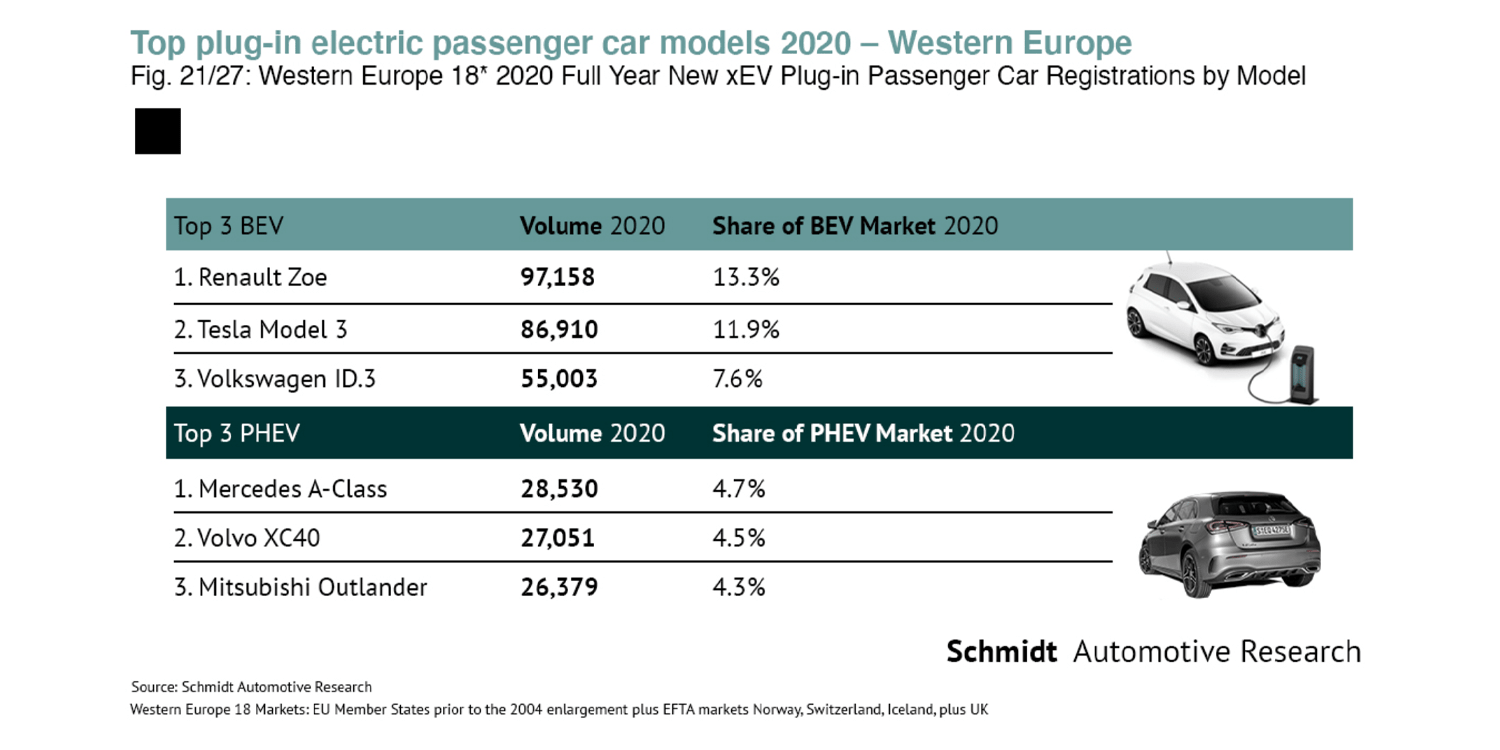 Legislation works and will accelerate in 2021

Long-billed as the kick-start to Europe’s move away from ICEs and towards EVs thanks to the EU block’s CO2 legislation essentially forcing car manufacturers hand, 2020 produced the goods with December even witnessing every fourth new passenger car registration being a plug-in.

Partly this was due to Auto-nation Germany finally having gotten on the electric drive train. Their market surpassed every other market and was twice as large as the next in line, France. Germany also accounts for more BEV registrations than all five nordic markets combined. 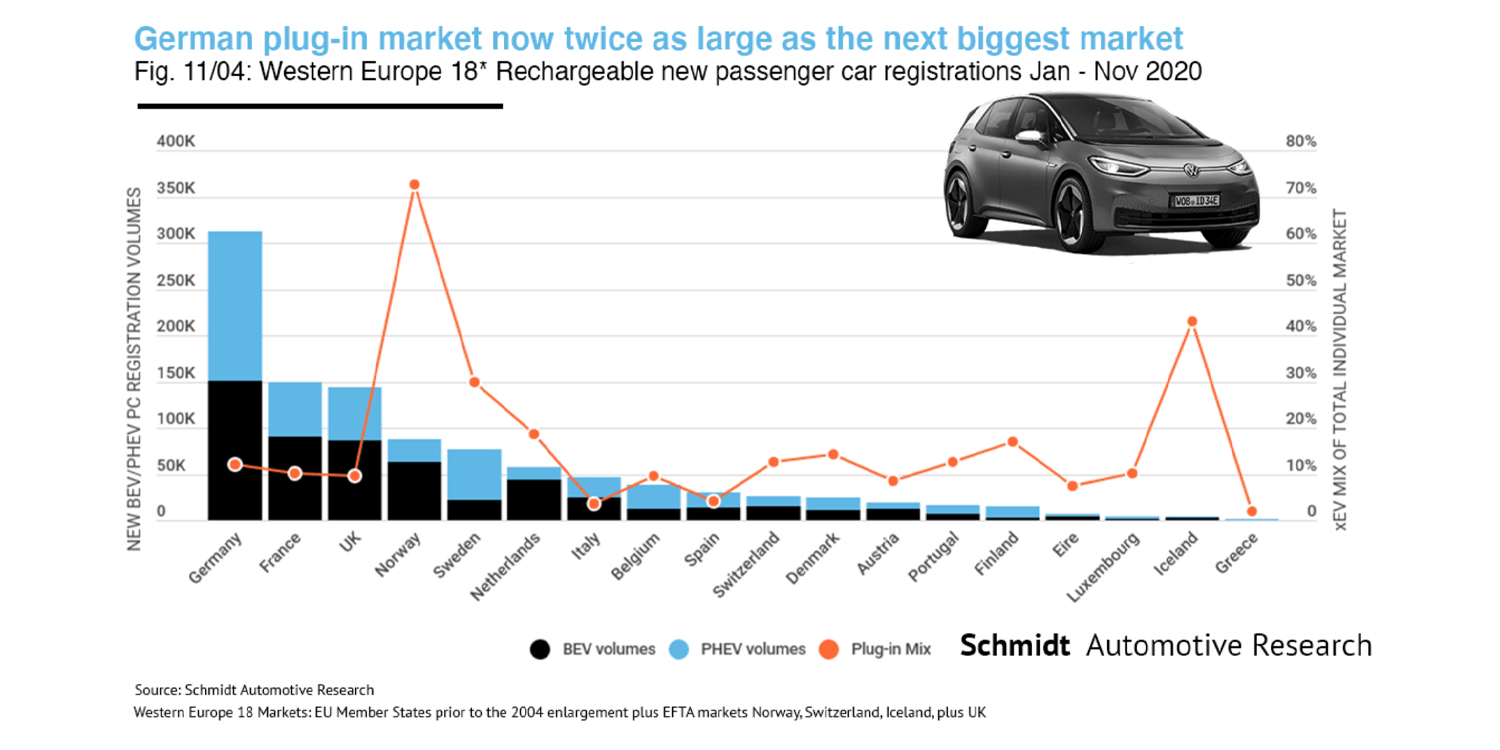 German BEV and PHEV sales were in balance with 194,167 units and 200,465 units respectively whereas, across the board, scales tended to tip to fully electric vehicles. Take French buyers opting for 110,920 BEV and 74,971 PHEV. In the UK, the third-largest market, the image is similar to 108,205 BEV and 66,877 sold. Pure electric and partially hybrid vehicles have almost reached parity in countries like Italy and Spain, albeit at lower volumes.

This trend will likely continue this year as governments exclude or reduce PHEV from incentive programmes. A recent analysis found their CO2-saving potential largely overrated.

As an immediate sequel, thanks to the EU fleet average CO2 emissions targets only being phased-in last year, with the worst five per cent from each fleet being omitted, 2021 will see momentum maintained if it is slightly reduced growth rate.

The start of production from Tesla’s European facility this year is likely to double regional Tesla volumes. Simultaneously, Volkswagen Group’s MEB ramp-up is expected to increase with an annual capacity of 330,000 units expected at the end of 2021. However, full annual capacity is not likely until 2022.

2021 is consequently set to be the full gala evening performance following the afternoon press-preview event in 2020.

With PHEVs added to the equation, key in helping meet compliance, especially for premium manufactures, the 2021 market is forecast to account for 15.5 per cent of the market or 1.907 million units.

In 2021 manufacturers entire fleet will count towards average fleet totals as well as a reduced value of so-called super-credits on offer (if manufacturers have any of their limited 7.5g/km amount left, spread over three years).

More in-depth analysis is published each month in the European Electric Car Report, also available on an annual basis. The full-year report is now available.

The European Electric Car Market report by Schmidt Automotive Research combines monthly cumulative and historical registrations data with in-depth analysis of 18 Western European markets. These include the EU Member States before the 2004 enlargement plus EFTA markets Norway, Iceland and Switzerland, plus the UK. China serves as a baseline.