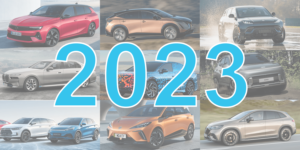 Always. More. Choice. The boom in battery-electric cars continues, despite subsidies dropping slightly around Europe. We dare to look ahead: what’s coming, what’s missing and what are we particularly looking forward to?

2023 will be the year when subsidies subside. Countries across Europe have been making changes. More mature markets are moving away from boosting demand. France has cut the EV bonus back by 1,000 euros to now €5,000. The new right-leaning government in Sweden has abolished state subsidies for electric cars and plug-in hybrids entirely. The UK ended the subsidy program similarly abruptly last June, while even EV wonderland Norway has been rethinking its policies. Funding pots in the Netherlands regularly get exhausted before the year’s end – and the list continues. As for the auto nation Germany, the changes appear measured. From 1 September, direct subsidies for commercial buyers will run out, and the so-called environmental bonus of up to over €7,000 only applies to private customers.

However, at electrive, we do not share the pessimistic assessment that demand for electric cars is, therefore, in danger of collapsing. Why? Because tax advantages and other benefits remain in place, and the pull effect of these indirect subsidies is powerful. Plus, people want electric cars. Full stop. The registration and sales data are evident in this regard. And lastly, the supply side (finally) keeps becoming more extensive and attractive.

In our outlook, we dispense with plug-in hybrids and focus on battery-electric cars. And because there are now simply too many, we do not claim completeness. Nevertheless, we want to list the most important innovations, from the exotic to the everyday cruiser to the price breaker.

Let’s start with Stellantis. The multi-brand group is revising the e-CMP platform. All models from the Peugeot e-2008 to the Citroen e-C4 get an improved traction battery with 50.4-kilowatt hours (kWh) net energy content. We suspect the new Jeep Avenger could become popular because it is a relatively affordable and stylish mini-SUV. If the anti-SUV forum discussions are anything to go by, on the other hand, the Opel/Vauxhall Astra Sports Tourer Electric and Peugeot e-308 SW station wagons should be bestsellers. Let’s wait and see. All of the models mentioned are also available as combustion engine vehicles. Stellantis electric vehicles on purely electric platforms will not arrive until 2025.

Mercedes and BMW expand their ranges

Mercedes is starting to ramp up deliveries of the EQE, EQS and associated SUV derivatives. The fact that the EQC is being phased out is good because Mercedes needs the acronym for the new MMA platform: there will be an electric C-Class, and we are sure it will be called EQC. Prototypes have been spy-shot many times. Perhaps the company will present a near-production study in 2023. Unfortunately, we don’t expect the market launch until 2024 at the earliest. That’s also the year the EQG hits the road, the electric G-model, whose premiere we’ll see soon, though.

The EQG will come off the production line at Magna in Austria. Just like the Fisker Ocean. A good ten years after the Karma, Henrik Fisker has made it all the way to a series product. Fisker has designed the BMW Z8 and the Aston Martin DB9, among others. The Ocean will be an aesthetic alternative in the segment of arbitrary Asian E-SUVs. In addition to the Ocean, we expect the premiere of the Fisker Pear, a mix of compact van and SUV. The Pear is to be manufactured in Ohio; production in Europe is being discussed.

Meanwhile, BMW is supplying the market with an increasing number of electric cars. We can’t rule out that publicly claiming to be sceptical about the electric car as a stand-alone solution on the one hand while offering more and more of them on the other is quite clever. For us in Germany, the iX1 is likely to be important. Not too big. Not too expensive. Not too flashy. In the luxury class, the i7 is coming in significant numbers. And, of course, we’ll be watching to see whether the smallest series of the iX5 Hydrogen actually runs. Much more important for BMW is the premiere of the i5. It will be visually conventional and, like most electric BMWs, based on Cluster Architecture II (CLAR). And, dear company car drivers, it will also be available as an estate wagon.

We expect a double power surge at the group’s Mini brand: the traditional three-door will be replaced and built in China with Great Wall Motors. This will be joined by the five-door Aceman, which could draw customers away from the Clubman and Countryman.

Delays in the VW Group

In the Volkswagen Group, we expect that the revision of the MEB platform – for example, with the ID.3, which will come in a slightly modified form from the fourth quarter – will finally eliminate the software problems. The fact that there is also another model, the E-Passat called ID.7 (found camouflaged at the CES), is almost unimportant in this context. In cooperation with Ford, an MEB electric compact crossover will also appear.

There is also plenty of delay with the Premium Platform Electric (PPE). The Porsche Macan EV, the Audi A6 e-tron and the SUV Q6 e-tron are based on the 800 Volt system. Will the studies finally become a reality?

Further down the price scale, many prospective buyers will be looking forward to the new Hyundai Kona EV. And the technical update of the Ioniq 5 finally brings preconditioning for charging stops. This is, of course, also available in the Ioniq 6, the most significant design venture since the Toyota Mirai I.

At Hyundai’s sister brand Kia, we expect the EV9 to be one of the many “fat chunks” rolling down the road. Americans call this class a full-size SUV. The advantage is likely to be a good amount of space. Still, everyone should be aware that European cities have grown and sometimes ancient structures that won’t bear oversized vehicles forever.

In 2023, the now Geely brand Volvo will launch the EX90 at the end of the year. Their EV brand, Polestar and its electric car with the simple designation 3 will also offer plenty of space. Do you want it three sizes smaller? Here you go: the Volvo EX30 is the Swedish-designed Smart #1, which will be joined by the #3 hatchback.

Renault serves the market for electric cars with tolerable dimensions with the R5 Electric, whose series premiere we look forward to in the year’s second half. However, it is not expected to be handed over to the first owners until 2024, and the R4 electric will follow shortly after that. For fans of commercial vehicles, we also recommend watching Renault. From the Kangoo Rapid ZE to the Master and heavy-duty tractors, there are several innovative products, some of which also feature fuel-cell electric drives.

Before we get to the Chinese brands, let’s look at the Japanese: After the false start of the Toyota bZ4X, we are looking forward to a first drive, which will probably occur with the identically constructed Subaru Solterra. Toyota will also present the production version of the bZ3X compact. And, of course, we wonder whether the China sedan bZ3 will come to us in Europe. We would have deserved it.

After all, the Toyota bZ3 is produced in a joint venture with BYD Seal in China and gets the same traction battery: the BYD Blade 3.0 is currently the most innovative battery system alongside the CATL Qilin. BYD combines LFP cells with 800 volts of onboard voltage and partial integration into the car body.

Next to the Seal, BYD’s other innovations seem almost banal, such as the small SUV Atto 3, the large SUV Tang and the sedan Han. In case word hasn’t gotten around – BYD is the largest electric car manufacturer in the world after Tesla. BYD’s strength is that the cars and the battery are made in-house. Build Your Dreams has, in our estimation, the most credible approach of any Chinese manufacturer to actually gain a foothold in Europe.

True, this is also suggested by Nio. But no one should ignore that Nio, like Xpeng, is a start-up compared to BYD. Public relations may be successful thanks to the Battery Swap Stations in cooperation with EnBW. Still, with prices that tend to be higher than Tesla, Nio first has to prove that it can hold its own in the tough competition. The ET7 and ET5 are coming, and perhaps also the EL7 SUV.

The average person is likelier to be happy about the MG4 Electric from SAIC or the Ora Funky Cat from GWM, which the Emil Frey Group distributes. However, the Funky Cat is not a real bargain: with an entry price of 38,900 euros and only 45 kWh energy content, low charging power and a small boot, it only comes close to European competitors in terms of price. See above: The Jeep Avenger in the fully equipped 1st Edition costs €39,900 and has 51 kWh. The Funky Cat is, who would have guessed from China, too expensive.

We would have liked to say something more about Nissan – why aren’t Kei Cars like the Sakura exported to us? But the former world sales champion is only bringing the Ariya alongside the Leaf for the time being. At the moment, we would rather have Honda on our minds: the electric HR-V, which was presented as e:Ny1 among others, could enrich the market and the Prologue.

Finally, we should not overlook Tesla. Elon Musk making offensive public statements and the share price falling does not make the company’s electric cars any worse. It is not a bold prediction that the Model Y will not only be among the best-selling electric vehicles in 2023 but also one of the best-selling cars ever worldwide. In comparison, the Model S Plaid is a sidekick. And as usual with Tesla, the rumour mill is bubbling: the Model 3 could get a minor visual but major technical makeover under project Highland. The change is less significant for the customer than for Tesla, which wants to simplify production processes via gigacasting and thus increase margins.

Mazda to reintroduce the MX-30 in California